Yesterday was a warm autumn day, and I managed to take some time out for what is sure to be one of the last productive insect photography sessions of the year. It was a brilliant day, with a deep blue October Sky stabbed by the first few brightly changing trees. 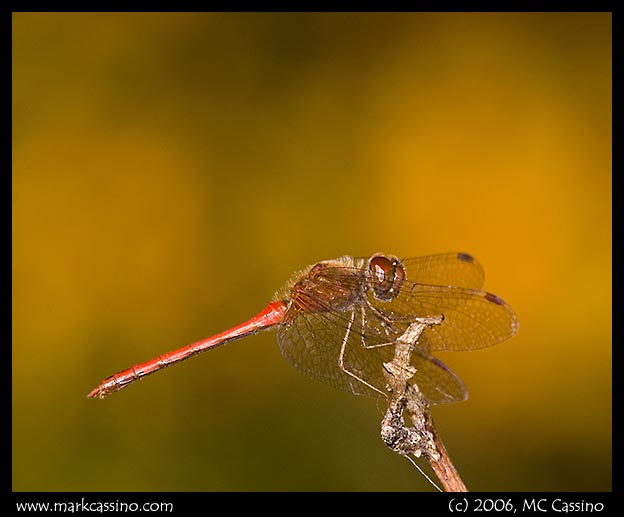 A warm day in October would be a cool day in August. This alone meant that the few dragons I saw were intent on soaking up as much heat as possible, and tended to land on the dark ground or a dark leaf, sucking up as much heat from the sun as they could.

So it was that there were few dragon out to photograph yesterday. I went to the McLinden Trails, a place that has proven to be productive all season long.

Unlike Friday, I traveled light. I didn’t even put the camera bags in the car. The insect photography rig was the only thing I brought, and I hiked out with ouly the camera and flash on a monopod, and a wallet of memory cards.

At the end of the day it was a productive trip, though I encountered very few dragon flies. The red dragon shown in many of these photos is probably the same individual – I photographed him on the way into the park, and then again at the same spot on the way out, a couple of our later. Otherwise, there were very few dragons to be found at all.

I wanted to get a few shots showing the dragons with the brown or yellow autumn colors in the background – and I think a couple of the shots of the red dragon worked in that regard. They certainly are in contrast to some of the early summer shots, taken at the same place, showing a lush green.

Aside form this red meadowhawk, few large darners buzzed over the fields of now entirely brown grass. A few sulphurs and white butterflies were on the late blooming Asters, and several times I saw a large mantid launch itself from one tree top to another. As I walked out of the park, a very large mantis was sitting on the trail, warming up in the days fading rays. Its easy to tell when something happens for the first time. The first time you see a firefly in the summer evening, the first robin of spring, the first dragonfly of the season – those are thing you remember. But it’s harder to tell when something happens for the last time – until you’re a ways along in the time stream, and suddenly realize its gone. I don’t remember the last firefly I saw, or the last ebony jewel wing… Maybe these wll be the last dragons of the year – but then, and let’ s hope – maybe not.

If the weather forecast is to be believed, the first winter blast is due later this week – with snow rain mix and temps in the 30’s and 40’s. Well, the compute models always seem to exaggerate as they look far ahead, so maybe it won’t be so bad. But maybe the dragons are gone for another year.