Last weekend I finished developing the film from my recent Chicago trip. I posted on this trip a few days ago, at which time I had developed 4 of the eight rolls of film shot during this two day exercise in urban street photography. 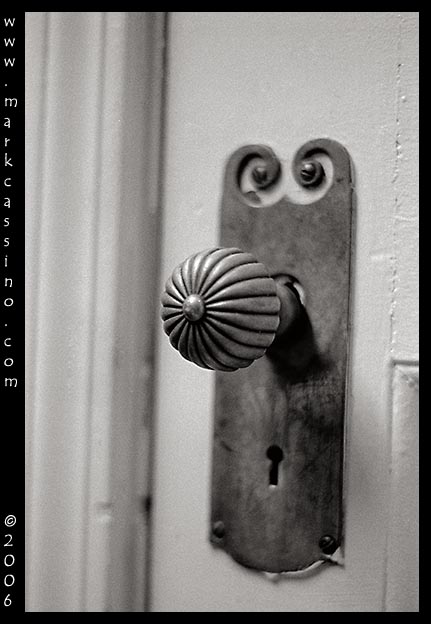 As luck would have it, those first four rolls were clearly the strongest of the shoot. The four remaining rolls were more or less just shots of details from the hotel room, a bunch of way mis-exposed images (not sure what I was doing with those) and a handful of images from the actual street.

Is it a sad state of affairs when a photo of a doorknob is the best you have to offer? If you define the value of a photo based on the content of the subject matter, what good is a picture of a doorknob (no offence to the folks who put together home improvement catalogs.) But judging a photo by the content of its subject is the most superficial of all assessments (and the most widely applied, sadly.) So – here’s a doorknob. Nice hotel room. I was sitting on the commode when I took the shot. It’s the only shot in this lot that I took the time to tone.

And then there was the closet in the hotel room. It was a great full sized closet, and like the rest of the room it had a ceiling way up high – 10 or 11 feet minimum. And there was shelf over my head (and I’m just over 6 feet tall.) 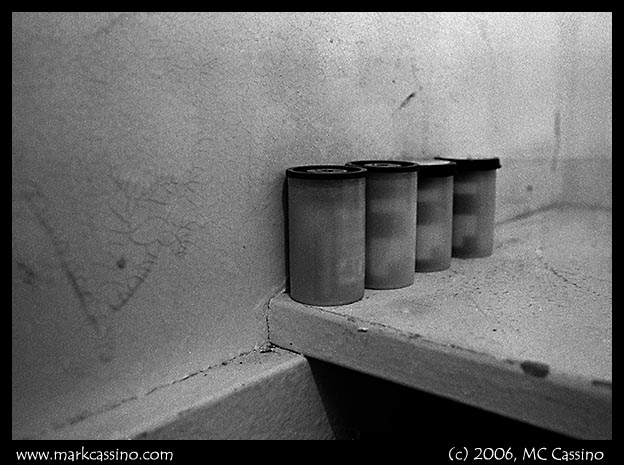 Well, I got more Jethro Bodine than Albert Einstein in me – as it turned out the light was hooked up to a button in the doorframe, and like your home refrigerator turned off when the door was closed. But still, that top shelf made a nice place to line up exposed canisters of film, and so at the end of the first full day there I snapped a shot of the four rolls of film exposed thus far.

I had to hold the camera over my head, and obviously could not see what I was shooting except in the mind’s eye.

I think some of those shots could have been the strongest of the series – but an unhappy accident during development ruined things.

I always develop one roll per tank, and I use the ‘double’ sized tanks (that can hand two rolls of 35mm film.), I also always use 600 ml of developer solution. Since a 36 exposure roll of 35mm film has the same surface area as a roll of 120 film (more or less) I reckon this leads to more consistent of results.

Unfortunately, I lost one of the little clips that holds the film spool in place. I used to just put an empty spool in the tank to make sure the spool with film on it didn’t slide out of the developer solution, but I got lazy and stopped doing that, and developed dozens of rolls with the spool unrestrained with no problems. 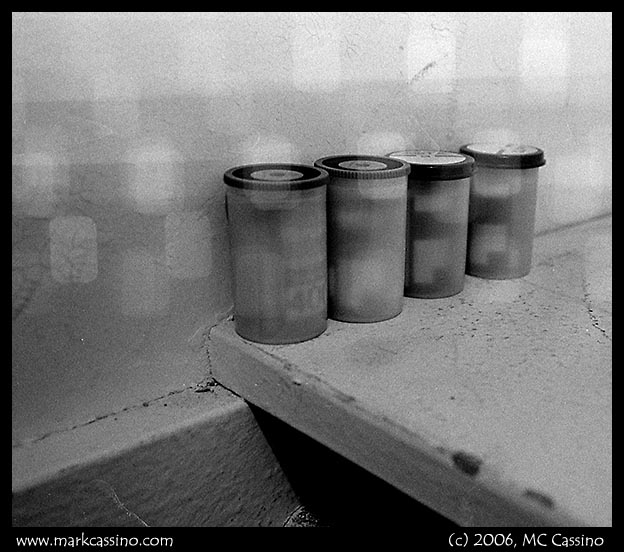 Until now... This particular roll of film slid on the center tube that runs down the middle of the plastic developer tank, and wound up at the top of tank – right where the developer and air space interface. The result was hard agitation marks in the center part of the roll.

I try to imagine how the developer could make those sprocket marks on the film – and I can ‘t figure it out. After all, the sprockets of the film roll are up in the plastic spool – so how does a perfect image of them get projected onto a few frames, just from the sloshing of Microdol-X in the tank?

This entry was posted by Mark C and filed under Street Photography, Film Processing.

Could it be that some part of the film (with sprockets) was higher than the one ruined and due to partial exposure to the developer, those marks were born?

When I developed the roll I put it in a double tank, but did not put the restraining clamp on the center tube. I think the spool slipped up in the tank and the top of the roll was partially out of the developer. Your theory is probably right that the developer splashed through the sprockets - but I can’t envision how it happened. Now I’m sure to use that clamp when developing just one roll!

I came across your post in my efforts to find out why this was happening to my film. I had similar problems but mine was more ‘global’ as it spanned across the entire roll sometimes.

I finally figured out what went wrong. You can read about it in one of the post on flickr..

Maybe something similar happened to this frame.

I took a look at the thread on flickr and it looks like you have solved the mystery. I’ve only seen this problem once, so I mmust have gotten careless with the changing bag. Good reminder to be more careful!