Summer is in full swing here in west Michigan. The days are not as long as they used to be, but they sometimes make up for their shortened duration with intensified heat. Tis is the time of year where the lush green of early summer takes on a brown tint. This is the time of year when a few leaves from the more stressed tress start to rattle about on the sidewalks and dirt roads, foreshadowing the great rustle of fallen leaves to come in the fall. This is the time of year when the flower wilts, though the foliage remains fulsh and full. It’s high summer – the dog star is barking. The birds still sing, but with a mean edge to their song, and not with the rejoicing of spring. 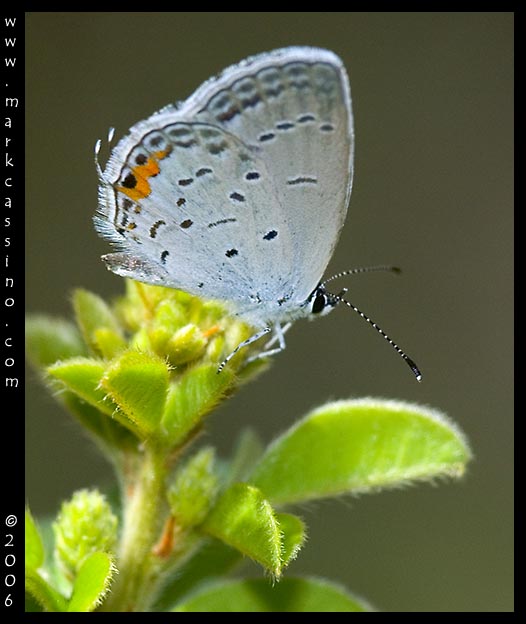 And this is the time of year when, for a true northerner, the prospect of a cold night by the fire, a dinner cooked long in a hot stove and not a backyard grilled, and night’s sleep deep under layers of blankets all beckon. Some folks may never understand why anyone would willing forsake the warmth and lush growth of the summer months, and eagerly embrace the stark realities of winter. But I think of winter of winter as a sort of temporal desert. For a period time, for a season, the earth grows harsh and hard. Those who live with the four seasons are like pilgrims who, whether they like it or not, make an annual journey into the clarifying and cleansing desert. And the don’t even have to leave home...

Hey – it’s August 7, why am I writing about winter?

I’m behind on my blogging. Last Friday I went out to the Allegan forest, my weekly trip to see what was happening. It was the first cool day after a week long, brutal heat wave. The heat had broken with strong storms and lots of rain, and so the sandy soil in Allegan was still damp, the plants in the barrens and savannas were still green.

As a day of photography it was pretty unremarkable and unproductive. I got a few shots of of an Eastern Tailed Blue, and a single dragonfly shot.

I started the visit with a trip to the barrens off 46th street, which in the spring is a riot of coreopsis. There always seems to be a second, lessor wave of coreopsis in late summer, and a few of the yellow flowers punctuated the green brown of the fields.

Although the heat wave had broken, it was still quite warm out in the midday sun. The edge of this field has a large area of cottonwood saplings – home to many nesting indigo buntings and other birds. The saplings are pretty uniform at about 12 feet high. Their leaves make a rubbery, slapping sound when a good breeze rustles through them. 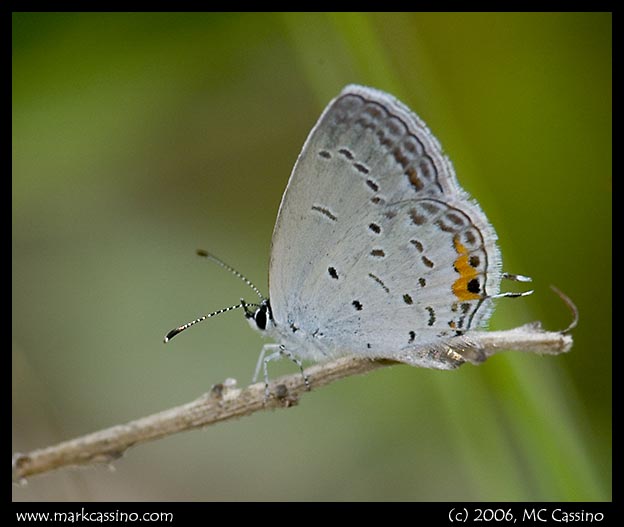 This is the time of year when cicada come out in force, and in this particular field there are always abundant cicada, not high up in the trees but down low, hanging off the branches of the smaller saplings or lumbering up out of the grasses and weeds. Usually I see them as they fly away – they often rattle against the leaves of whatever plant they are leaving, and then buzz away, making a deep, loud, buzzzzzzz as they lumber off. I saw several on the branches of some of the small oaks and boarding cottonwoods, but they invariably flew off as I approached – so, no photos.

On Saturday I taught a summer photography workshop at the Pierce Creek Center. I had planned to go out shooting with the group afterwards, but things ran a little late (in case you haven’t noticed I can be long winded) and I spent the time after the class talking with some of the folks who had attended.

Packing up after the workshop, I saw dozens of cicada killers working a strip of weedy prairie between the parking lot and the road in. This little berm of earth was no more than 10 or 15 feet wide, but was home to dozens of the cicada killers who had evacuated large warrens in the sandy soil. One female flew by with a paralyzed cicada in tow – looking as large as a hummingbird or chickadee.

Over the rest of the weekend, here at home, I broke out the insect setup and shot some of the thread waisted wasps and hornets that congregate on the flowing spearmint that grows along the fence line in my little urban yard. I’m not a big fan of the mint – it’s aggressive and relentless as it spreads. But my house is just a mile or two of the AM Todd factory, and this area was no doubt host to many mint farms in the past. While these plants may just be wild vagrants, they may also be a bit of testimony to the history of the local area.

In any event, two large clusters of gray coneflower are now sprawling in the mint patch – and I’ll put my money on the hearty prairie plants to succeed. 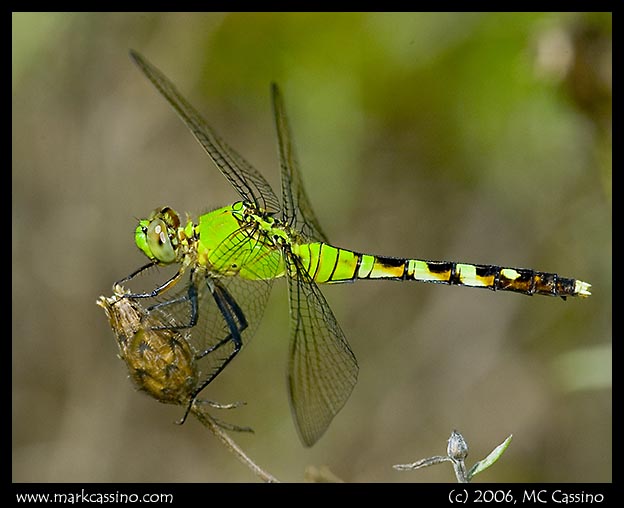 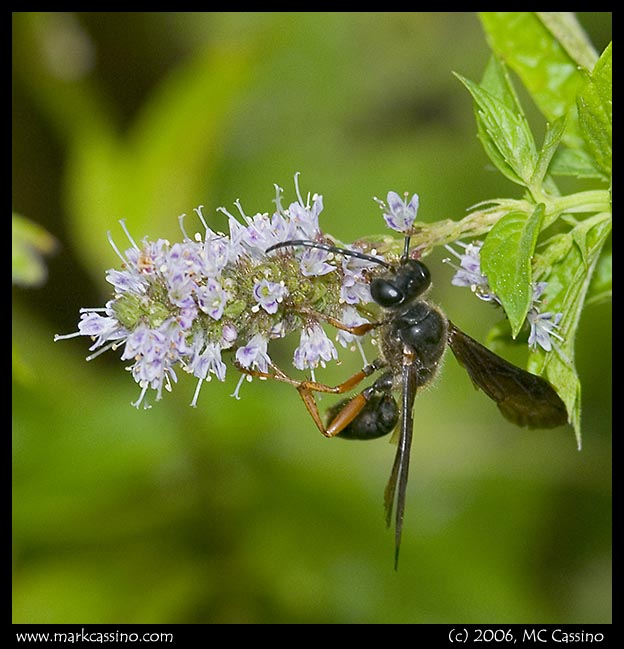 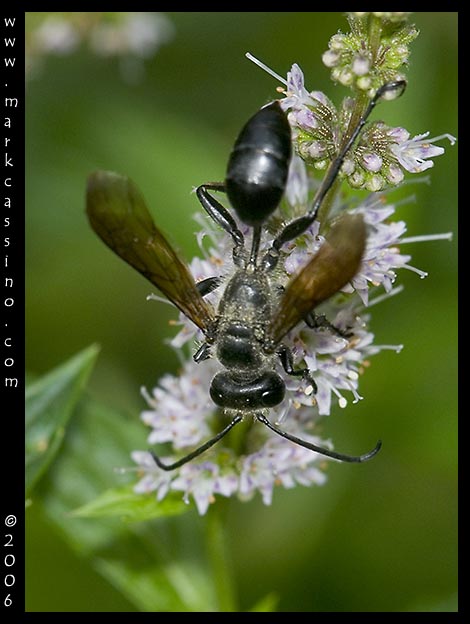 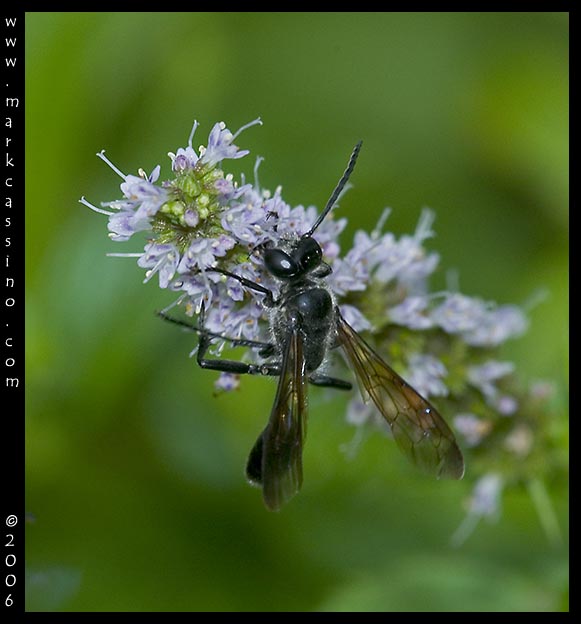 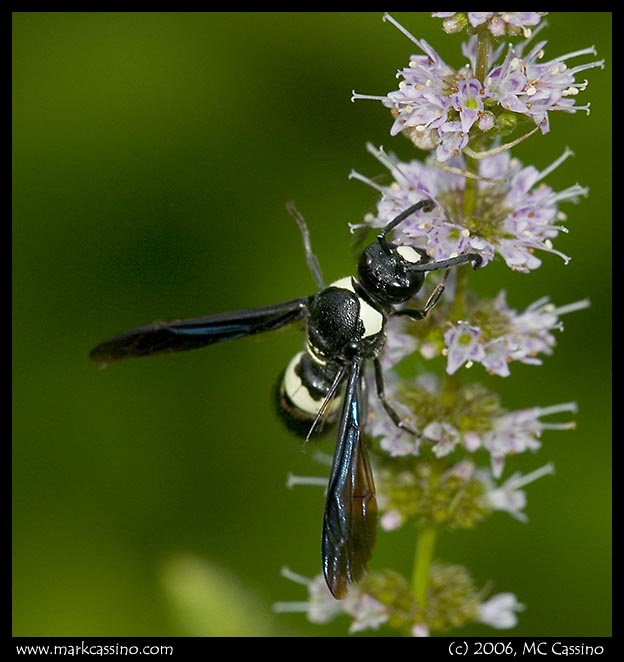 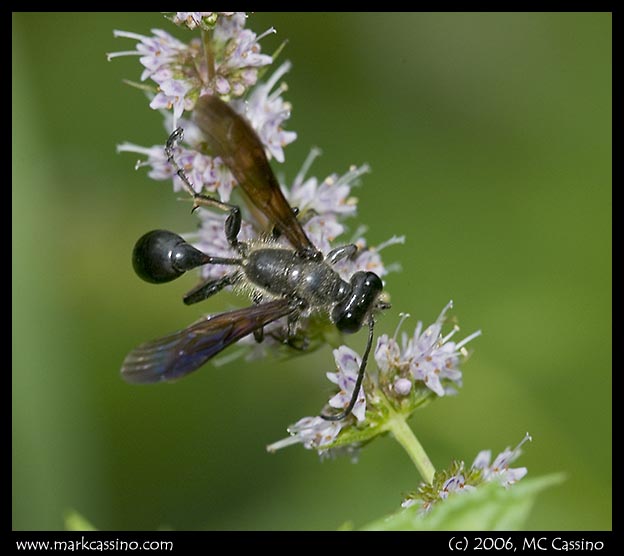 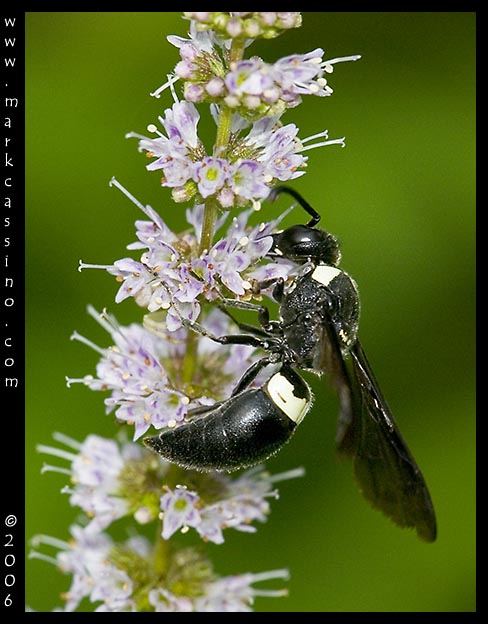 it’s august 7, why are you writing about winter?
prolly for the same reason i think about it every time i go out, every time i notice the thinning greenery. not happily. i realize we have at least a month more of warm weather, maybe even the most productive month. but the fear of winter is building. so,…

the bird sanctuary was disappointing. but i’ve been promised trips to pierce creek and the k’zoo nature center,looking for a setting more natural, less structured.

i like the thread waisted wasp pics. i’ve been trying to get something from that feeding group (wasps, hornets, bee flies and some smaller flies that i can’t id), but they’re too fast for me. so far.

careful w that poison ivy. i’ve never had the experience, but i’ve seen what it can do. which partly may explain my fondness for long pants and long sleeves.