Winter is upon us, and the means less time just hanging out in the warm outdoors, and more time inside – “nesting,” “hibernating.” Or just plain going stir crazy. 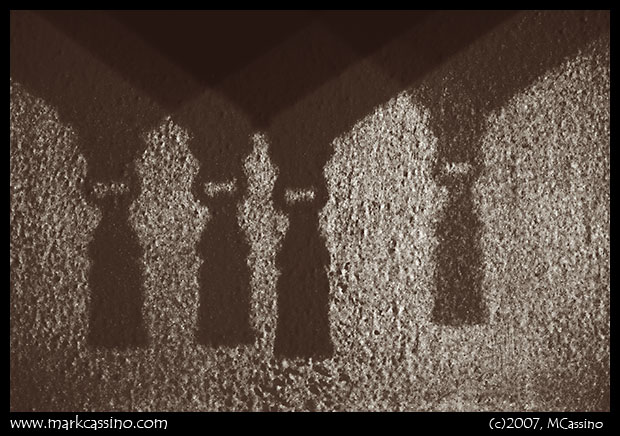 Since I love macro photography so much, spring through summer days are always productive. Want to take a photo? Just step outside and snap the nearest ant, or fly, or seedling or flower… I often think that in terms of macro shots, the smallest natural area offers thousands of possibilities.

Man made environment offer fewer options. Having an old house helps, but ultimately everything crafted by humans is ridiculously simple compared to nature’s handiwork.

But still, on a cold winter day, with dull light and sloppy weather out of doors, the occasional image flickers up in the house, and something mundane and taken for granted can suddenly seem interesting and engaging.

So it is with a couple of “Around the House” shots shown here.

The first is the multiple shadows of an iron tassel that hangs from a light fixture in the front hall. My house is about 80 years old, and retains most of its original fixtures – as well as the original knob and tube wiring. When I say “iron tassel” I mean a bit of iron, molded to look like a tassel made or cords. It hangs from the bottom of a a light fixture, which is more or less a rhombicuboctahedron in shape (the top and bottom are pointed so it is not quite a true rhombicuboctahedron.)

Well, big words aside, I liked the way the iron molding of a tassel reflected on the plaster wall. A multi-light fixture in the dining room was casting multiple shadows of the tassel, and while they were quite faint on the wall, they were engaging. I wound up scavenging a wooden flagpole (the kind you use to hang a flag next to your front door) to push the light fixture out a bit – in part to get the shadows onto a patch of wall with even lighting, but also to play with the placement of the various shadows created by the individual light bulbs.

Finally, I had to get a small step ladder, since my poking and prodding of the light fixture resulted in the shadows being case about 8 feet above the floor. But with a step or two up, I was able to snap the shot, using the Pentax K10D, ISO 400, shake reduction on.

Like I said, the shadows were quite faint, so I pulled the shot into PhotoShop, boosted the contrast and deepened the shadows. I then converted it to a tritone, and custom toned it using the individual curves tools that are available in this mode. Convert back to RGB color, and the final image is ready.

I'm tempted to name this shot after a line from an Eno and Byrne track in My Life in the Bush of Ghosts. "We will appear to you, from time to time..." Hmmmm - I've used that line before, but from time to time, it seems to apply... 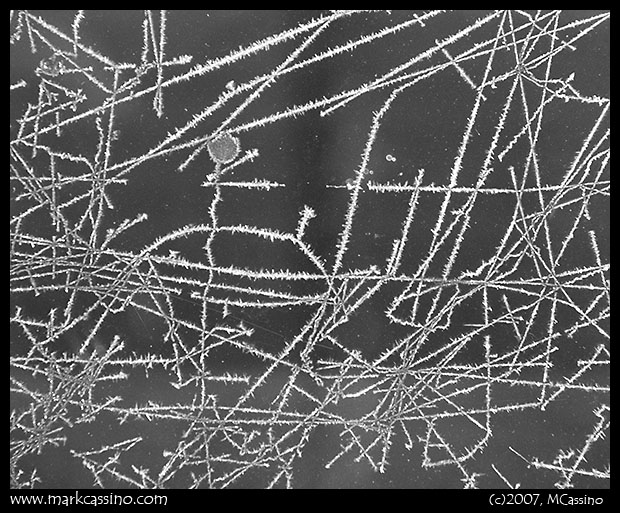 The ice crystals was a much simpler shot to take. These formed on the storm window on one of the windows in the living room. Unlike the beautiful and dense florets that window ice usually forms, the ice on this window chose to become a haphazard dashing of random vectors.

The direct sunlight was making the ice lines pop, so photographing them was a simple matter of standing on a chair to get even with the ice. The background of the shot largely determined the framing, since I had to frame the ice in a way to not show my neighbors’ window. (Their house is only about 20 feet away.)

Shooting through window glass – a quarter inch thick and 80 years old – took a bit out of the sharpness, but there is something about the random and chaotic lines that is compelling. I found myself thinking of Jad Fair’s “Headless Horseman” song for the first time in years.

This entry was posted by Mark C and filed under Pentax K10D, Around The House.