Yesterday Pam and I returned from a relaxing week in Paradise – Paradise, Michigan, that is. Nestled up in Michigan’s upper peninsula, we spent several days in a small cabin on the shore of Lake Superior. No internet, little television (only 5 channels) and lots of fresh air, open space, and sandy beach made for a great trip. As usual, Chris and Robin at Saunders’ Sunrise Cabins were excellent hosts.

I didn’t intend for this to be a photographic trip, instead focusing on hiking, reading, and just plain relaxing. Nonetheless, I wound up experimenting with making abstractions of some of the local scenery. Back at Grandfather Mountain last June, Tony Sweet showed a few photos were he deliberately introduced motion blur – extreme motion blur – to create an impressionistic effect. After taking dozens of ‘straight’ photos of the woods and beach, I started experimenting with long exposures, and moving the camera around.

The first experiment was with a group of trees in the forest near the Upper Tahquamenon Falls. After taking a few straight shots, I lowered the camera’s ISO, stopped down, and gently swept the camera up and down during the 1/4th of a second exposure. 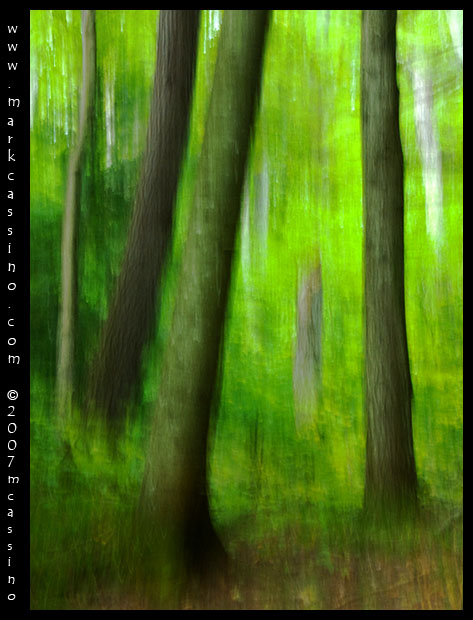 I liked the effect, but wasn’t sure about the completely soft and blurred result. It’s nice, but I wanted some details in the shots. As a result I worked with a few double exposure in the camera – first taking a crisp, sharp image, and then combining that with a soft, motion blurred shot.

We had a day of steady rain after the first few days of hiking in the sunshine, and that gave me a chance to work with the images in Photoshop on the laptop. (Though there was no internet – I still had a computer!)

I wound up manipulating the images, almost entirely through Adobe Camera RAW. If you heavily push the Clarity, Vibrance, Saturation, and sharpening / noise settings, you can produce a really organic, granular quality to the image. In addition, I quickly realized that there was no point in combining multiple exposures in the camera – just take the shots and overlay them in Photoshop, with much more control and no worries about exposure adjustments for multiple shots. Over the next few days I took and worked on some more images – while also reading Harry Potter and playing an extended round of Civilization III on the computer.

My favorite shot from the trip was taken on our last night there. It was late, dark, and the warm sunny afternoon had given way to cool clouds and a light rain. I put the Sigma 14mm f3.5 lens on the camera, and went out to take some beach shots.

One change since our last visit to Paradise was the installation of dozens of electricity generating windmills on the Canadian side of Whitefish Bay. After dark the windmills light up with warning lights – flashing red lights that randomly switch on and off between the windmills. 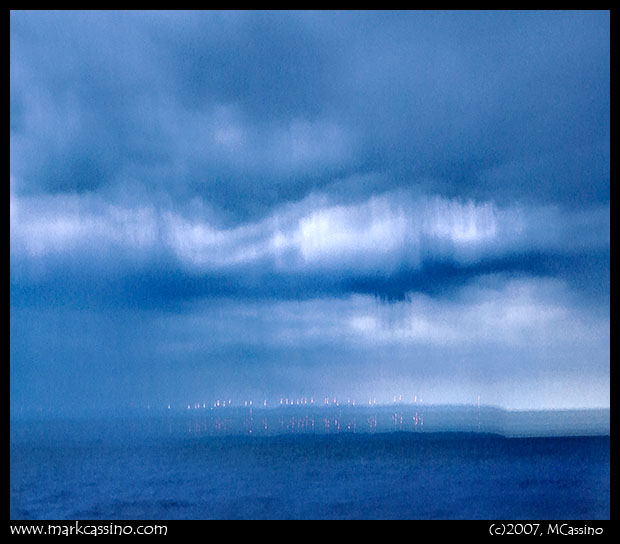 Down on the beach, I set the camera to under expose by two stops (it was dark and I wanted it to look dark in the photos) and cranked the ISO up to 800. That still resulted in an 8 second exposure at f11. Instead of trying to introduce intentional motion blur, I just hand held the camera, trying to time the shots to coincide with the illumination of the greatest number of windmills.

I like the effect – like I said, a storm was coming in you could see the rain falling in the few light spots in the sky. A little work in Photoshop has resulted in an interesting image. Unfortunately, at the small web resolutions, the fine pastel like grain and texture of the image is lost, but otherwise this image conveys a bit of the feel of the picture.

So yesterday we drove back home, and reconnected with our day to day lives. The cats were really glad to see us, and won’t leave us alone. Cali’s winter coat in coming in, and that means she’s changing colors from black to black with gray highlights. Fall is coming, winter soon – but I’m glad that we were able to squeeze in a retreat to the north in the final days of summer.

This entry was posted by Mark C and filed under Landscape Photography, Midwestern Landscapes, Michigan.