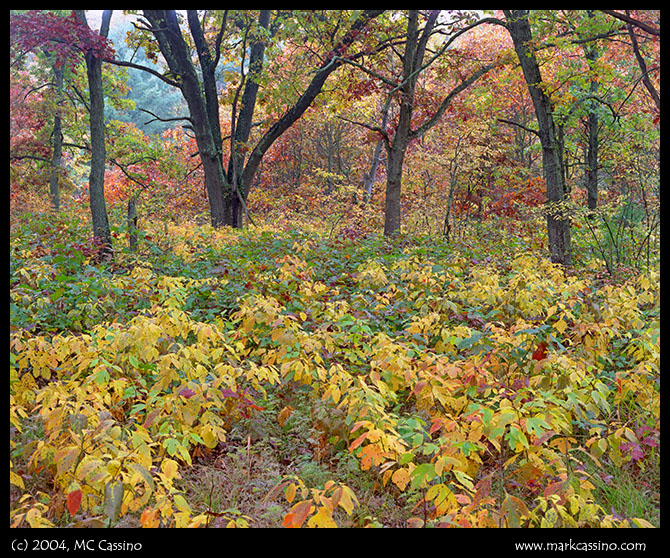 Over the last several days I’ve posted a few essays on the relative qualities of film vs digital photography. What I haven’t done is post any actual comparisons of photos. I was planning to head out today to do just that, when I realized that I had on had photos taken a couple of years ago, that would do the trick perfectly. This photo is called “Weedy Sassafras.” It’s a favorite of mine, and it’s done OK critically. Last year, a 20 x 24 inch print of this image was juried into a regional fine arts exhibit, the West Michigan Area Show. It has also been a consistent seller in local gallery exhibitions and art fairs. I took this shot in October, 2004. It was an overcast day, a light rain had just stopped. This is the edge of an Oak Savannah in the Allegan Forest, a spot that in the spring hosts a dense population of the endangered Karner Blue butterfly. Although I had been shooting both medium format and with a digital SLR for about 1 year, this was my first fall color outing using either of these cameras. And so, just for the fun of it, I shot the exact same shots with both. I’d just pop one off the tripod, and pop the other on.

The shot at the top of this post was taken with the Pentax 6x7 medium format SLR, tripod mounted and using mirror lock up. It was shot using the excellent SMC 67 55mm f4 lens, stopped down to f22 for maximum depth of field. The film used was Fuji NPS color negative. This is a full frame scan, produced on an Epson Perfection 3200 flat bed scanner, scanned at 3200. The file has been cropped slightly. At the 3200 dpi scan this slightly cropped scan is 8492 x 6765 pixels in size – sufficient for a 28 x 22 inch print at 300 dpi. I like Fuji NPS and I have no problems with the results I get from the Epson flatbed scanner, but to fair a finer grained, higher resolving transparency film scanned on a dedicated medium format film scanner (or better yet, a drum scan) would probably have produced a more detailed and sharper image. So, consider this an “entry level” medium format shot. Here is the same shot taken with the 6 megapixel Pentax *ist-D: Well, at itty-bitty web sizes they sure do look similar. With a little effort I could probably get the colors to match almost perfectly. We’ll look at the detail a bit more closely, but first the technical details of the digital shot: As noted, this was taken with a Pentax *ist-D 6 mp digital camera. The camera was tripod mounted, using an SMC FA 20-30 f4 AL zoom lens at 20mm, f22. The image was shot in RAW mode, and the RAW file was processed using Photoshop CS Camera RAW converter. In order to get a file comparable in size to the medium format film scan, I opened the RAW file at 6144 x 4101 size, using the RAW converter to interpolate the results. Sharpness was set to 50, and global adjustments to the color balance and exposure were made. After opening the RAW file, it was up-sampled to match the 67 medium format scan in the vertical dimension, resulting in a 10,135 x 6765 pixel file – which could be cropped horizontally to almost exactly match the 6x7 shot. The angle of view for the two lenses is almost identical. The digital exposure has a more rectangular aspect ratio, but as noted the image could be cropped to horizontally to match the medium format shot. For those not familiar with the Pentax *ist-D, you can read about it at dpreview.com (click here to go right to the *ist-D page.) For those not familiar with the excellent Pentax optics, take a look at the lens tests on Photodo.com. The lens used on the *ist-D is comparable with the best lenses in its class for “35mm-digital” shooting. Don’t believe me? Then wade through the following paragraph (skip it if don’t care or adverse to lens test technicalities.) Although it is a zoom, the FA 20-30 f4 AL is a first class lens. At 20mm, f8 (the smallest aperture evaluated) Photodo rates it with a weighted MTF transmission factor of 0.77. This ties with the Nikkor 20-35 f2.8 at the same aperture, while the Canon EF 20-34 f4 USM comes in close, with a weighted MTF of 0.74. Comparing the Pentax zoom at 20mm to 20mm prime lenses, it comes in slightly behind the Nikkor AF 20 f2.8, which has a weighted MTF score of 0.79, and ties the Canon EF 20 f2.8, which scores 0.77 at f8. While I might have been able to see a difference using the Pentax SMC 20mm f.28 prime (which gets a weighted MTF of 0.80 at f 8) I suspect that, in real world terms, these lenses all perform basically equivalently. The long and the short of it is, the lens used on the *ist-D is comparable with the best lenses in its class for “35mm-digital” shooting. So now let’s look at some details. Here’s the 6x7 exposure again, marked up to show three areas to be compared side by side, at full “actual pixel” magnification. (Note, these images may need some time to load.) 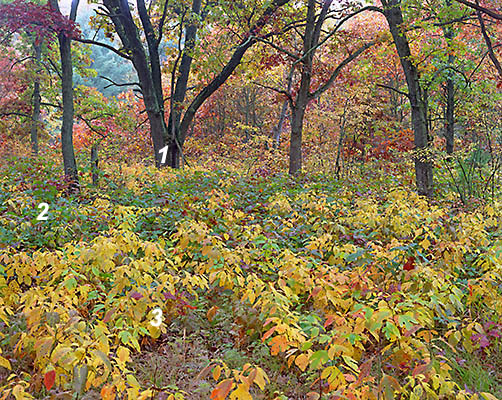 This first test (see #1 on the image above) is the area directly to the right of the large tree. First – the medium format shot: Next – the digital shot: 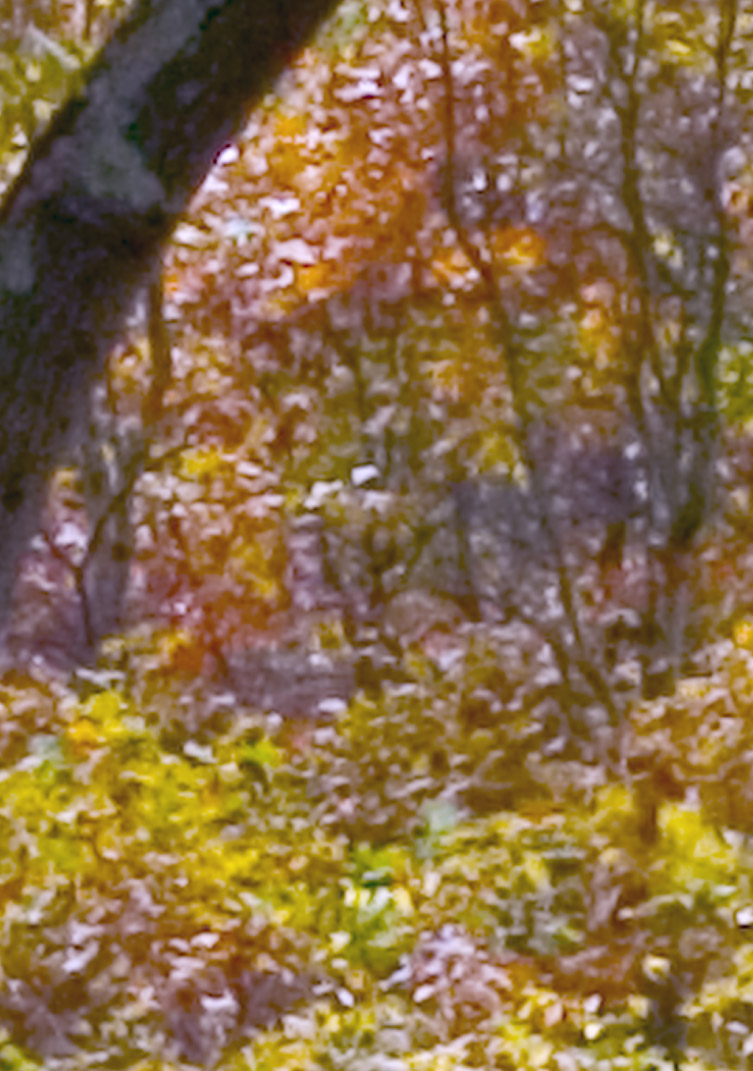 I think the images speak for themselves. The superior detail of the 6x7 film image is obvious. This is clear not only in the fine detail in the image, but also in the way that colors are rendered. In the digital shot, the colors tend to “cloud” in areas, while in the film shot they are more closely linked to the actual leaves. Here’s another set (the area just below “2” on the reference photo.) Film: 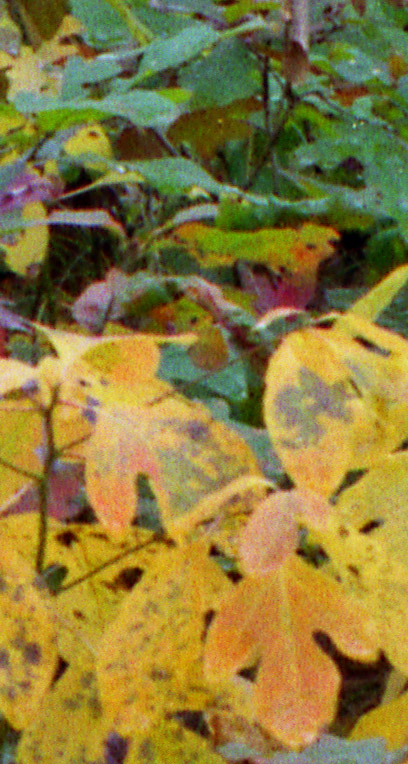 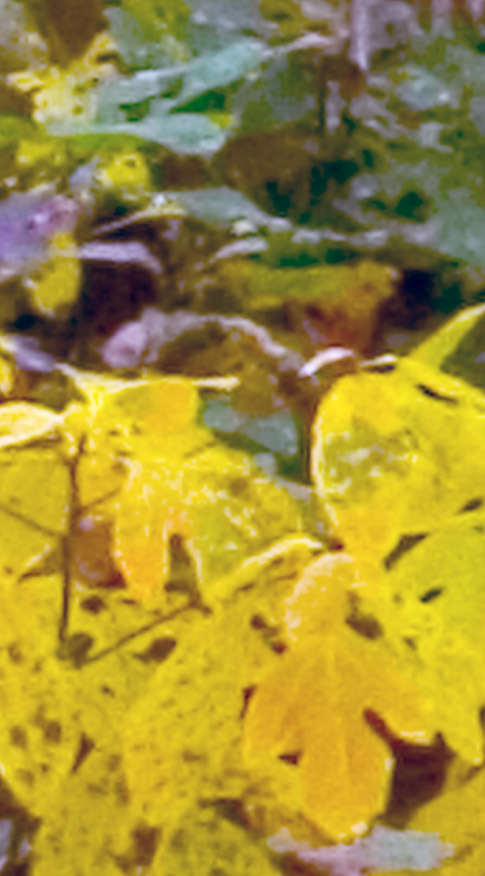 Yes, you can see grain in the film. And maybe with a bit of color tweaking the digital shot would come across better. But the grain is lost in the sumptuous detail of the medium format image. You can even make out the drops of rain on the green leaves of the film shot – something you’d be hard pressed to do with the digital shot. One final comparison: Film: 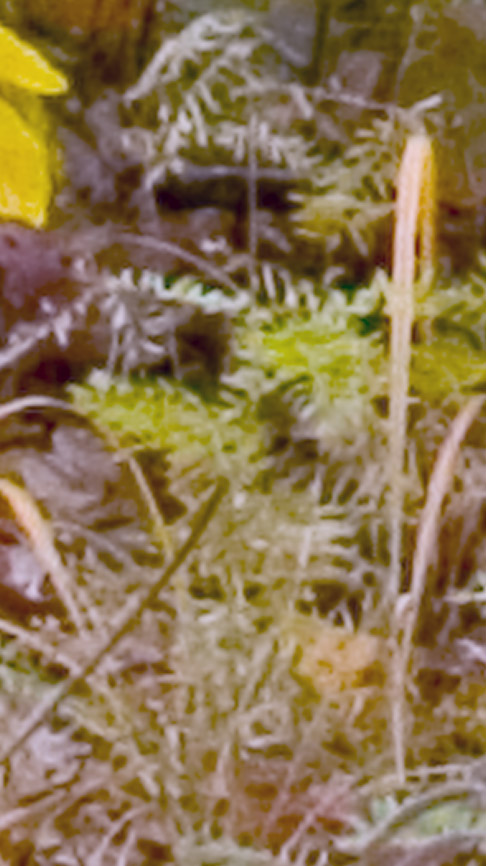 Here again I see a clear advantage in the degree of detail in the Medium Format shot. Obviously, there are many vagaries in this test (as with any test.) But I think it shows how, with extremely high detail subjects, medium format film out resolves 6 megapixel digital. A defender of digital photographs might counter that I could have tried a higher megapixel camera, used a better RAW interpreter, or whatever. Good points – but with the film images, I could have used a better scanner, higher resolving film, or (to go nuclear) used large format instead of medium format. (The more I think about this, the more I want to start shooting large format!) So what is the point of this test? Does it show that medium format is “better” than digital? In my opinion, it simply shows that for this very specialized type of photography where the ability to resolve fine detail is critical – film still holds an edge over digital. As discussed in other essays (see the index), film still retains a tremendous advantage over digital in terms of resolution. It’s also interesting to note that while digital’s short comings become more obvious with really big prints, it’s still visible even in smaller prints. If you look closely at the actual pixel samples, you’ll see that a lot of the fine detail “breaks up.” By that I mean that lines and areas of shading that should be continuous are not. Even scrunching down the print to 11x14 or 8x10 does not mend those breaks. They become less obvious, but if you look carefully, or look with a trained eye, they are still perceptible. So I’m more convinced than ever that for highly detailed subjects, film is the way to go. On the flip side, I’m also more convinced than ever that resolution is less important in most situations that one might assume. The sample image here is a monster in regards to detail. I’ve already mentioned in other essays that when it comes to close-ups, macros, and most general shooting, digital captures all the information there and does a better job than film in the areas of edge sharpness and noise. In fact, I could of posted this test comparing a snow crystal micro-photograph shot on Velvia with on shot on the *ist-D, and demonstrated the tremendous advantage digital holds in that specialized form of photography. So at the end of the day, there is no absolut "best." When shoting the birds, butterflies, or dragonflies on the Oak Savannah, I will absolutely use the digital camera. When shooting the weedy, brambly, high detail landscapes, medium format (until and uless I go larger format) will be the way to go. But I felt compelled to post these tests because I saw a lot of what I considered poorly designed or uncritical tests of digtial vs film, that often reached the erroneous conclusion that digital was best in all categories. For this test, to compare resolution, I picked a really gnarly subject. If I had shot a parking lot from a building rooftop, and compared the results, I doubt that any difference would be obvious. Why? Natural objects have far more detail than any man made object. I learned that years ago, testing macro lenses. Even ultra fine detail on printed currency was simplistic when compared to any old half rotten leaf picked up off the lawn outside. At any rate - rant aside - what it all boils down to is picking the platform that works right for your subject. And if you actually read this far - check out the general discussion on comparable image characteristics between film and digital and the "Stuff Per Pixel" essay.

And for now, I hope to be done with this subject.

This entry was posted by Mark C and filed under Photo Techniques.