Yesterday I picked up a new digital camera – the Pentax K10D. After charging the battery I took a few shots of the website maintenance staff, and then called it quits, figuring that I’d save the battery for shooting out in the storm today. 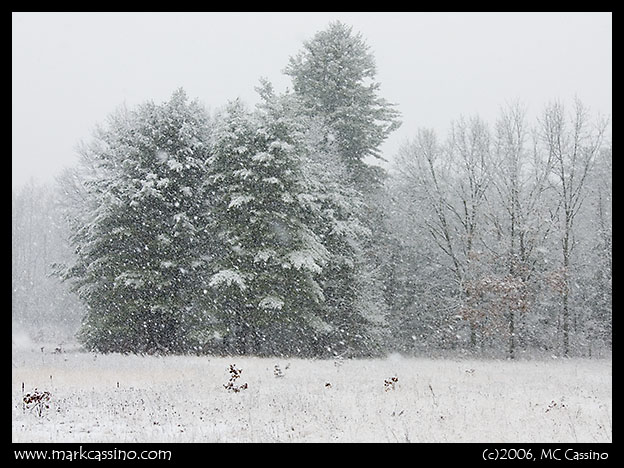 Of course – I knew it would storm today. Everyone knew that a weather system was passing through the media hype was predicting up to a foot of snow by this evening.

But of course, the weather forecasters were wrong, as usual. But the weather today was still nasty.

Early this morning, it was pouring rain on top of a few inches of snow (which rapidly turned to slush.) The temperature was just below the freezing point, so the rain was freezing into an ice sheet at a remarkably fast pace. Fortunately, that didn’t last long After that, a light snow settled in and as the temperatures dropped, the snow picked up and left a blanket over the region. 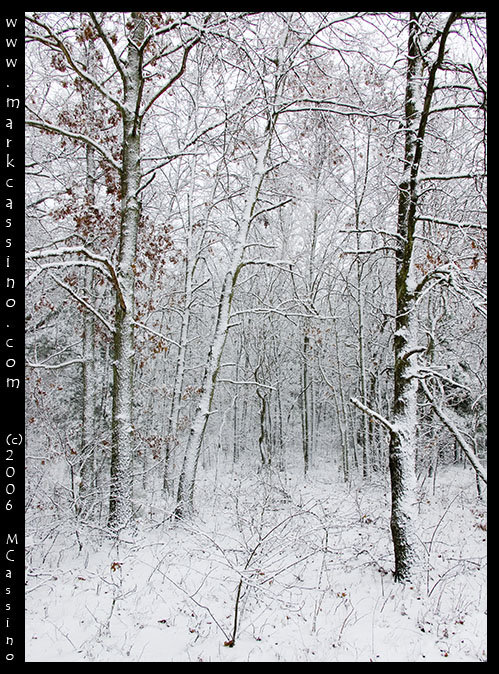 Today was the day I had set aside to test out the new camera, so I packed up a purely digital kit (the K10D and *ist-D) and headed out into the snow storm.

Since firearms deer season is over, I decided to head off to the Allegan Game Area. I last visited Allegan in mid September (!) so I was way overdue to touch base with the area again. I was also eager to see how the new camera would perform.

After a slow drive along an icy M-89, I finally made it to the Allegan woods. My first stop was the Coreopsis Field along 46th street. This is a prime insect and wildflower shooting area in the summer months – but as you can see from the first image, it was pretty bleak today!

I pushed into the scrubby woods along the border of the field, hoping to extract an interesting tree shot. It’s hard to describe just how much time and attention goes into lining up the trees, framing and re-framing, till the shot seems to be just right. I decided to use the K10D handheld at ISO400. (If it works for Neopan, it should work for the digicam as well….)

I also used the DA 18-55 lens that came with the camera for all of these shots. Though it is a bargain lens, it seems to be competent once stopped down. Between the relatively high ISO and the built in Shake reduction, I was happy with the degree of sharpness and detail in the images. In fact – I’m pretty surprised at how big an increase in detail the 10 megapixel camera shows over the 6 megapixel *ist-d. The new camera seems to do a much better job capturing the nuance and detail in scenes with lots of data – like brambly woods – better than I expected. 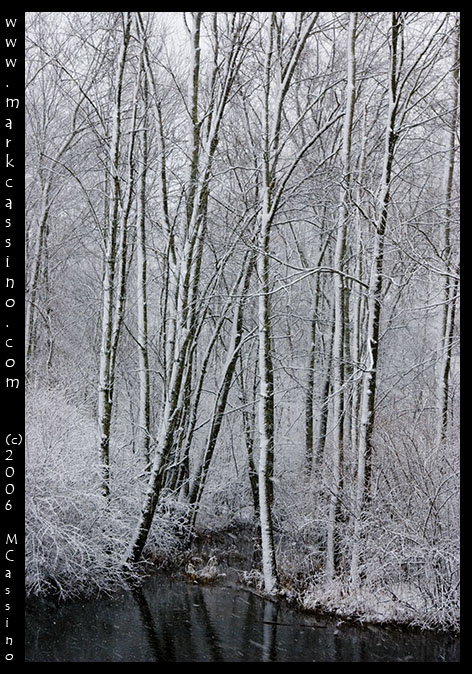 Of course – the amount of info available to capture today was limited. The heavy snow and intermittent waves of fog that would rise up and blow through the woods all made for very low contrast scenes. As good as the evaluative meter in the K10D seems to be, it was still thrown off by the blanket of snow, so most of these shots were taken at +1 stop exposure compensation. And believe it or not - these are color shots (I actually pumped up the saturation) - it was obviously a pretty bleak day.

After stomping around the now barren field, I headed over to 126th street to dead end near Swan Creek and the wildlife refuge. The narrow two track was mucky and slick with snow – and it was a fun game to keep moving fast enough to not get stuck in the mud, but slow enough not to skid off into the woods.

The parking lot at the end of the road would have been filled with hunter’s vehicles just a week ago, but today was empty. It’s almost always empty when I visit, and I should feel lucky to be able to enjoy the 10 months of the year when this place is more or less just deserted, and I can wander around for hours without seeing a soul.

Swan Creek was its usual picturesque self. Here again the shake reduction and ISO speed made it perfectly feasible to shoot hand held at F16, for maximum depth of field.

I filled up the memory card for the K10D at Swan Creek. It took almost a hlaf an hour to dump it onto the X’s drive II, so I decided to head back home and take a look at the images for the day.

A this point in time, my impressions of the camera are excellent. Sitting at the computer, processing RAW files is not as much fun as listing to the radio and dunking film in the developer du-jour, but one thing doesn’t preclude the other. For now, I have to say that the increase in resolution from 6 to 10.2 megapixels is greater than I expected – and since the relatively low resolution of DSLR’s for landscape shooting has been my major concern with them, it looks like the digital tide is sweeping in faster than ever… 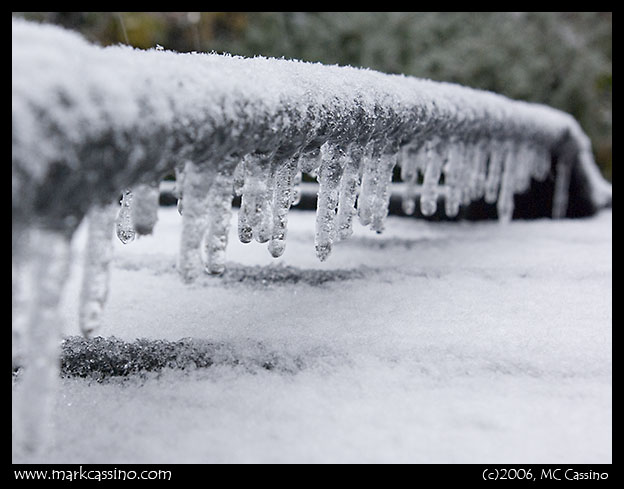 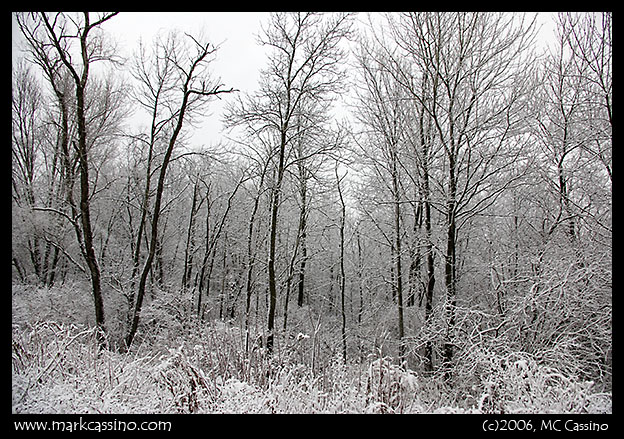 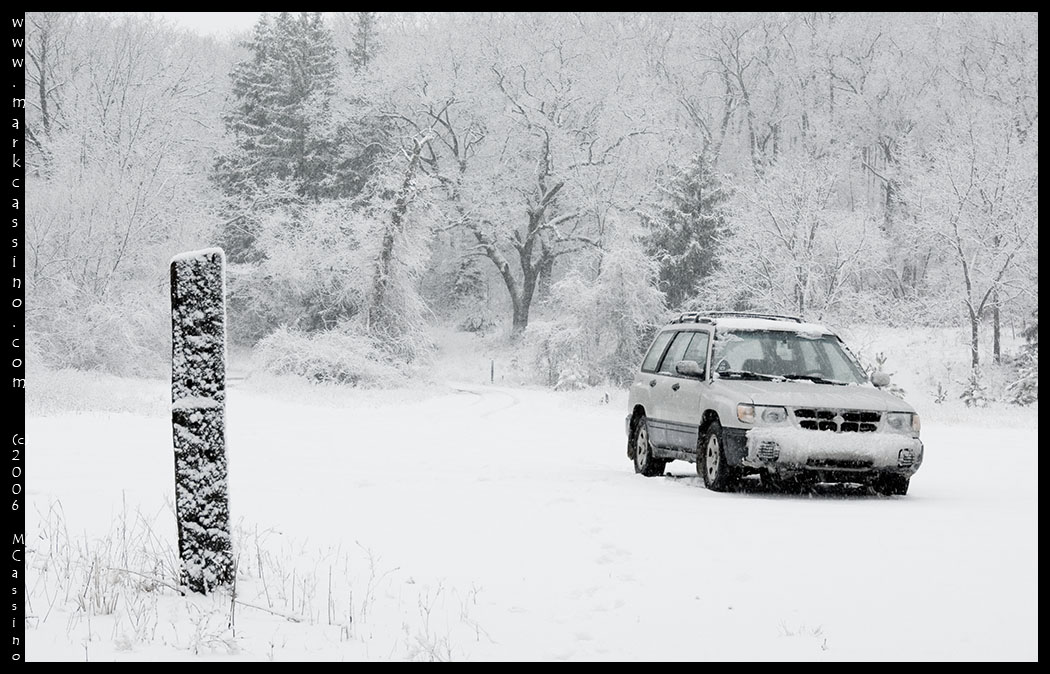