Ok – I may be complaining about autumn and winter and the all too short days etcetera… but in reality it’s been quite warm here in SW Michigan. Last year at this time the ground was white with snow, and we had some of the coldest weather of the season. This year things have been unseasonably warm.

So, on the Friday after Thanksgiving I ventured out to the McLinden Nature Trails, camera in tow. It was a gorgeous warm sunny day – more like late September than the end of November.

I had a couple of hidden agendas. For one thing, I had just placed my order for a new digital camera – the 10 megapixel Pentax K10D. With the improved resolution, build in anti-shake device (which turns virtually any lens into an image stabilized lens) this camera will certainly be another nail in film’s coffin.

So – I decided to grab a few rolls of 35mm black and white films - Ilford delta 100, Neopan 400, and my last roll of Plus-X 125 – and go for a bit of a walk. What better time to fully embrace film, and a good session developing it – than while waiting in expectation for the latest digital camera. 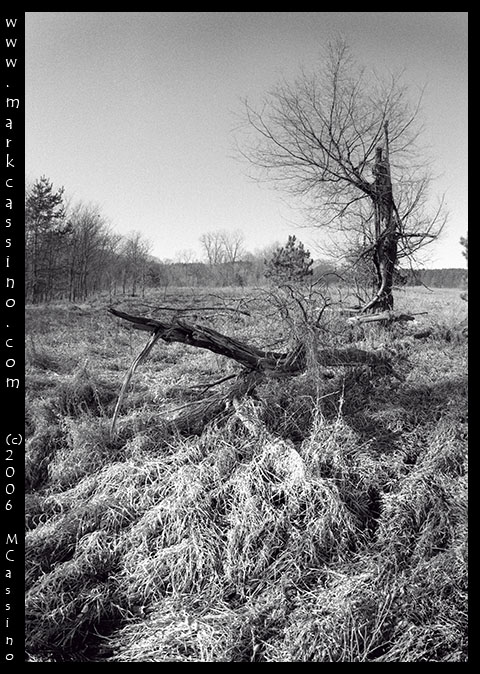 That’s one agenda. I also just wanted to get out an do some shooting. None of the projects that I’ve been contemplating seem to be engaging any more, none of the stuff that I just plain have fun doing – shooting bugs and botanical close-ups, for example – are available. Even the fall colors have given way to the just plain bleak and boring Midwestern landscape. So I figured it was a good time to just get a camera in my hands, and shoot on impulse – what better way to blow off a November funk.

And lastly – the most hidden agenda of all – I harbored hopes that maybe, just perhaps, there would be one hardy meadowhawk or late Mourning Cloak still out and about, offering the chance for one last session of insect photography.

Well, the tick frost in the shaded areas – even in mid afternoon – quickly dashed those hopes. Yes – it was has been unseasonably warm, but it still get cold at night. And aside from a few small gnats and mosquitoes, there were no bugs to be found. 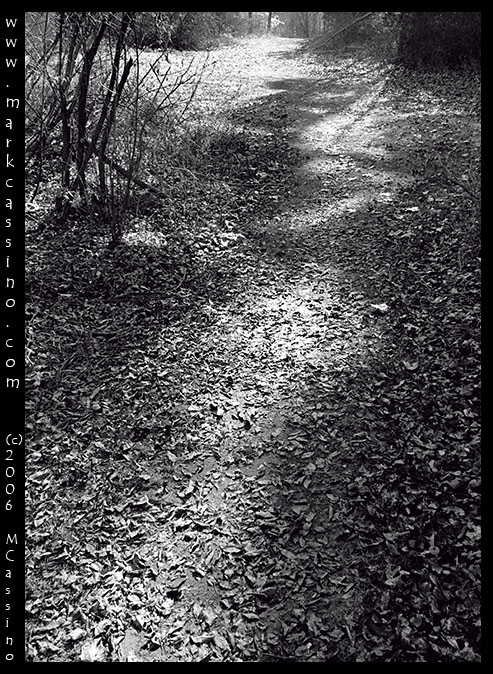 I turned my attention to trees, hoping to capture some of the stark ‘Novemberness’ of them. Trees are always around, so more remarkable than others.

I brought a light kit with me to the park. I had picked McLinden because this weekend was the middle of firearms deer hunting season – and my usual haunts are open hunting areas. And while McLindon is technically a city park, even there the dull thuds of hunting rifles drifted through the trees – maybe people hunting in the park, maybe on adjoining land.

I don’ think anything notable came out of this November ramble. I had wanted to shoot the fallen tree for a while, and I was glad to have the chance to work with it. As the afternoon wore on, and as I looped around the trail to find the sun shining in my eyes, I became more interested in the play of the sunlight on the leaves, the grass, and water in the small stream that runs through the park.

So I particularly like the sunlight glimmering on the leaves scatted on the path in the park. Leaves on the ground are at least a minimalist subject, and any dynamic in the photo comes from just light itself.

I've mentioned Harry Callahan in a few recent posts. My first exposure to his work was in the form of a Hallmark Calendar for 1967, simply labelled "Photographs By Harry Callahan." The photo for November is "Chicago, 1950" and the subject is simply leaves on the ground.

Seeing this photo was a marvelous experience for me - it's a great image, but more than that it is a radical image. It works, but has none of the mechanisms that make a photo work. If it was posted on Photo Blink or Photo Critique.Net, Photo.net, or any of the other myriad internet photo sites - it would be ignored, laughed at, or 'critiqued' to conform to the commercial-pop standards that reign. Seeing that photo was a wake up call for me - and it weighed heavily on my mind as I was out shooting on this November walk. 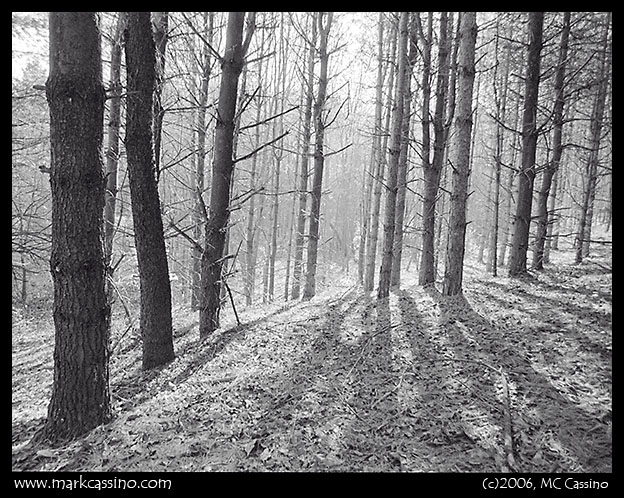 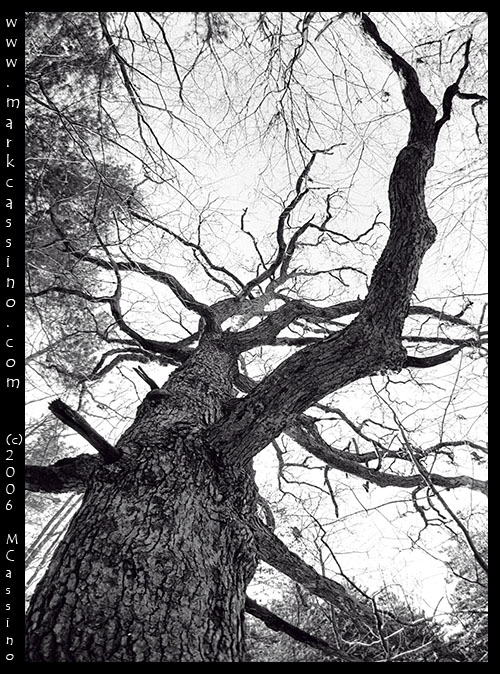 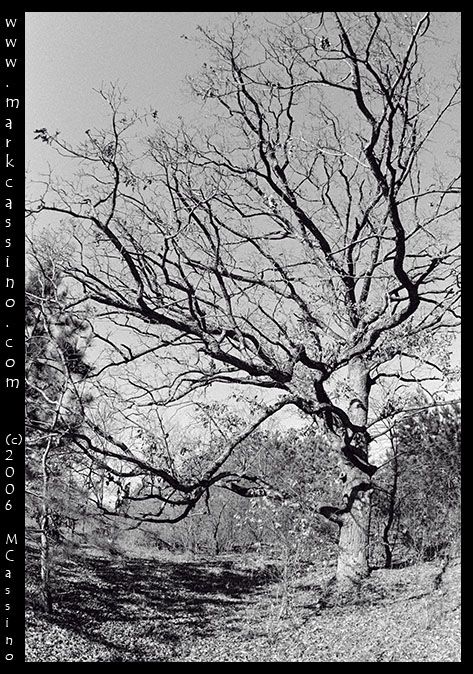 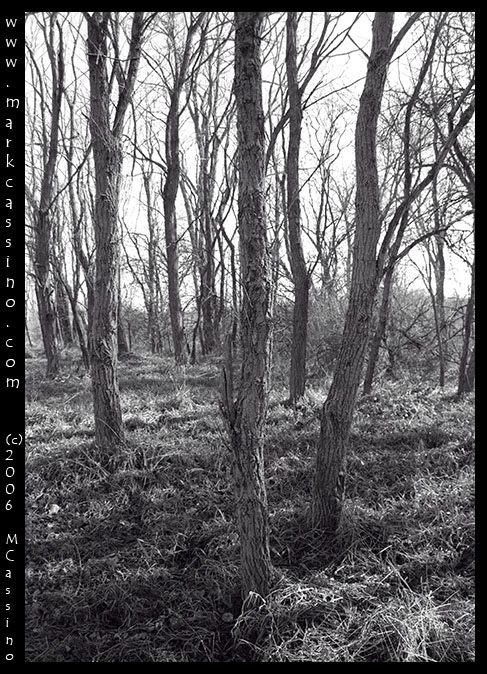 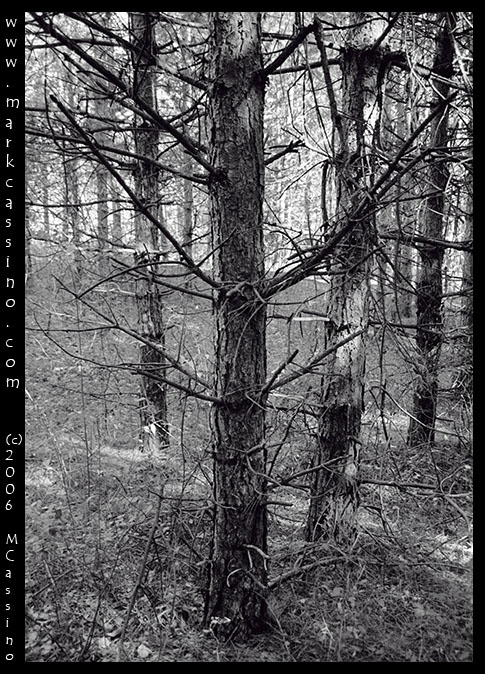 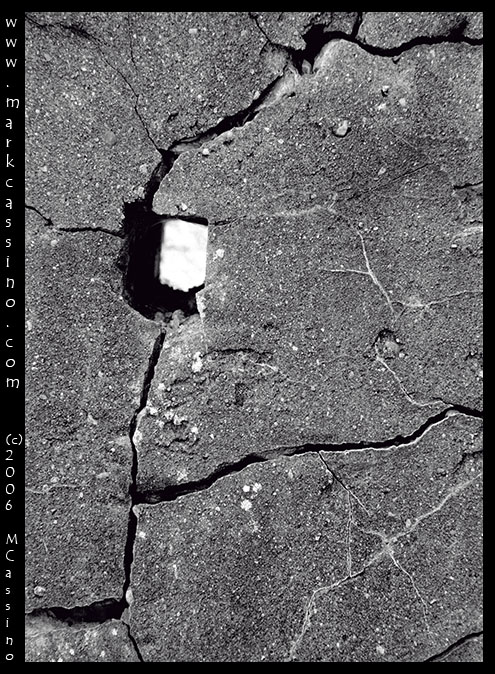 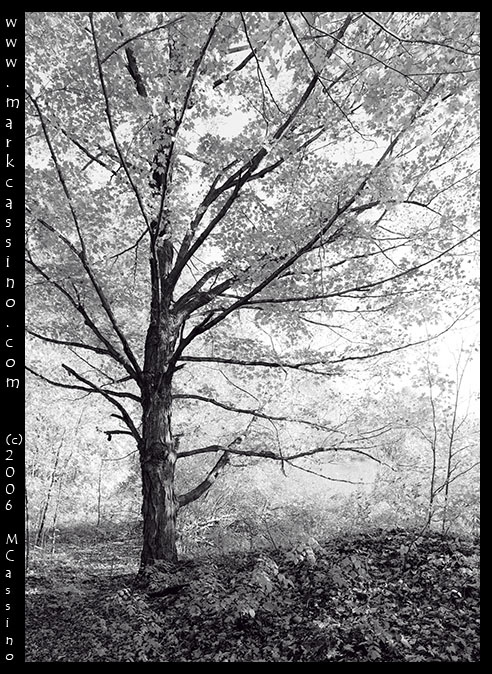 This entry was posted by Mark C and filed under Landscape Photography, Film Processing, Pictures Of Trees, Midwestern Landscapes.