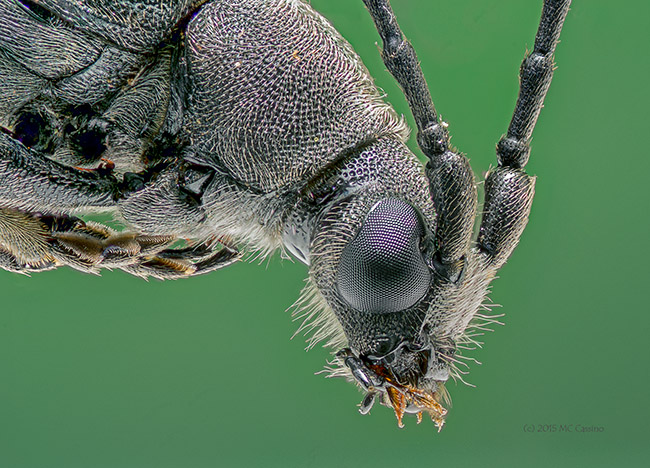 A beetle, perhaps a longhorn beetle (family Cerambycidae),  taken at about 4x lifesized. Click on the image for a larger / more detailed view.

I tried a different technique with this image. Instead of making a single pass at the subject, trying to take a hundred or more exposures to be stacked together, I  took a more relaxed approach and took only 20 to 40 photos in any single pass, but took five passes at the subject. I then stacked each of those 5 passes in Zerene stacker, using the two methodologies that it supports. That gave me 10 output image which were tan stacked together in Photoshop.  All in all, 140 images total were combined, though through 5 intermediary stacks.

My thought was that with the basic, manually controlled focus stacking rail that I use, I could never successfully get enough overlapping images without missing some areas - and gaps between exposures have been a recurring problem in recent images. By taking multiple low sample passes at the subject I am basically betting that the out of focus areas won't land in the same place on all of the images, and by taking 5 images like this it pretty much assures that any point on the subject will be sharp in at least one exposure.

It seems to have worked! I'll be trying more with this in the future.

Here is a reference photo of the full specimen:

This entry was posted by Mark and filed under Insect Photography, Extreme Macro.