Two weeks since my last post – I’ve been down in the basement workroom much of that time, cutting out mats and mounting photos. All this in preparation for the Art Etc art fair last week – which seems to have gone pretty well based on the conversations had with visitors to my booth.

I guess I should talk about art fairs before they happen so people know about them. Someday I’ll work on the commercial side of all this…

Anyhow – in a totally non-commercial spirit, while shooting fall colors last week I stuck the Vivitar IC 101 Panoramic camera into my pocket, loaded with some rather stale Fuji NPS 35mm film. The ISO 150 NPS seemed ideal for most in the sun shooting situations (good thing since the camera has no exposure controls) and as I schlepped around with the Pentax 6x7 medium format rig, I used the Vivitar to take a few other than standard shots of the autumn foliage.

The camera did not always cooperate. It seems to be getting fussy about when to respond to shutter button – and whether to respond at all. And each roll is missing a few sprockets where there wind / drive mechanism jammed while advancing the film. But for a $2 camera it’s holding up pretty well.

Most of my favorite spots in the Allegan Forest are featured here. We have the Olf Farmstead, the Coreopsis Field, Laughing Bird Woods, and other select locations.

Not that you’ll find those names on a map. If a place doesn’t have a name, I give it one and use it. That may seem pointless, since I’m only the only person who knows the name, but then Adam was the only person who knew the names of things before Eve, and naming things is a birthright we inherit from him. So these names aren’t so much points of reference as they are, well, you know, names.

Shooting with the Vivitar 101 IC Panoramic camera got me thinking in panoramic terms. And so while in the Coreopsis Field I shot a few frames with the Pentax 6x7, composed with the intent that they be cropped to the same aspect ratio as the Vivitar. The result is this last image - the negative is about the size of two 35mm exposures, side by side, and the detail on an large print is exquisite. I was experimenting (I.e. using for the first time) with Kodak UC 400 – 120 format, of course. Grain is not much of an issue with the 6x7 format, and the colors really snap with this film.

So ultimately Vivitar IC 1010 toy camera not only kicked out a few good shots by its own right, but go me thinking outside the box a bit to put the 6x7 to different.

Well, at least thinking in terms of a different sized box…

And in what has to be a little bit of a milestone - I hit over 1,000 film scans this year while scanning this latest bast of film. Film may be waning - but over 1,000 images scanned in the last 10 months or so tells me its still an important medium - at least to me. 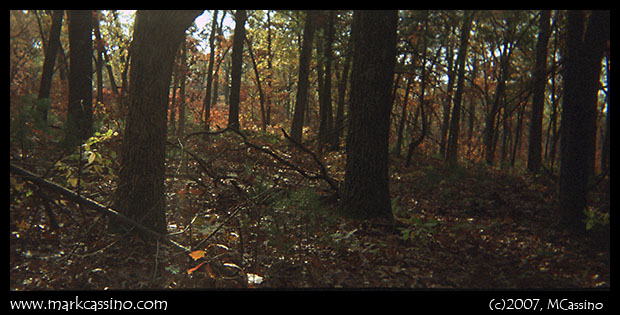 That last picture looks extremely majestic…just something about all those trees in different colors against the skyline. Nice photos.