Last weekend my wife and I stopped by the Mount Carmel Cemetery in Big Rapids, Michigan. We were on our way back from a family wedding in Traverse City and made the side trip to the town she grew up in. 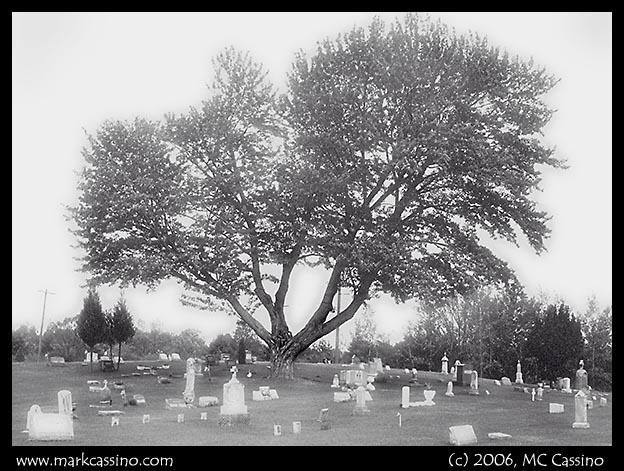 While I took a digital camera and zoom lens along on the trip, a part of me yearned for the simplicity of a basic film SLR with a standard 50mm lens. So I also took along the Pentax LX and SMC-A 50mm f1.4 lens. No zoom, no auto focus, no program modes (except aperture priority.) I also brought a few rolls of Neopan 400 B&W film.

After the recent experience with the Pz-1p – where the camera was pulled out of moth balls only to find it had developed a sticky shutter from disuse – it seemed like a good idea to give an occasional workout to the cameras I like and want to keep using. So – the venerable LX was pulled out of mothballs, and I was happy to enjoy the exceptionally big and bright view finder (what happened to view finders in modern cameras?)

So – on to Mount Carmel. This is the Catholic Cemetery in Big Rapids, and many of my wife’s Irish ancestors are buried under a huge Maple tree near the front of the cemetery. It’s really a treat to see a tree this size. The many branches that spiral out of the main trunk are held together with a cable that wraps around the tree.

The light was flat that day – it was cool with a dreary overcast sky. I pushed the Neopan 400 to ISO 800, processing it in Microdol-X diluted 1:3. The push gives the film a higher contrast than usual, but the images still look flat to me.

I opted to give the exposures that ‘old fashioned’ look with some simple PhotoShop adjustments followed by conversion to the purple based tritone I’ve been using for most of my B&W scans. It’s interesting – not great, but it gives the photo a little more character than it would of had without the affectation. 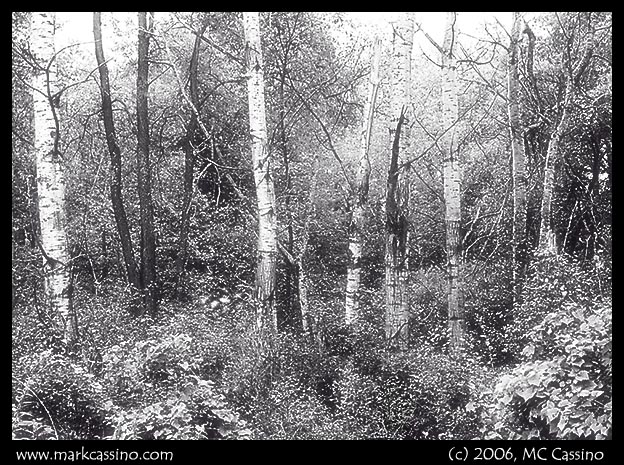 Behind the cemetery was a scrubby woods. Being that far north there are lots of birches growing wild in the woods, and more on a whim than anything else I snapped a few shots of the birches and other trees. Applying a few Photoshop manipulations made this image pop. It’s not conventional and doesn’t do well at internet size – but the myriad highlights off the scrubby leaves, and the broken birch trunks have something compelling about them.

As I’ve noted before – Midwestern landscape photography is more about finding that little niche of space and time where things come together and create some sort of atmosphere. I’m not sure is Scrubby Birches really gets there or not – it will take a big print to really determine the potential (something I haven’t done yet). But it speaks to me.

It's  funny that when I started out in photography, my goal was to take photos like the ones I’d see in magazines or advertisements. And maybe I managed to get a few of those. But increasingly, if a photo I take looks like something I’ve seen elsewhere, I find it uninteresting and don’t feel that it’s a success.

This entry was posted by Mark C and filed under Landscape Photography, Film Processing, Pictures Of Trees, Midwestern Landscapes.

Great photos,
like to see work in black and white as you have done here. Keep it up!

Thanks John - much appreciated!