On Friday I headed out to the Allegan forest yet again, hoping to get some final insect shots of the summer. 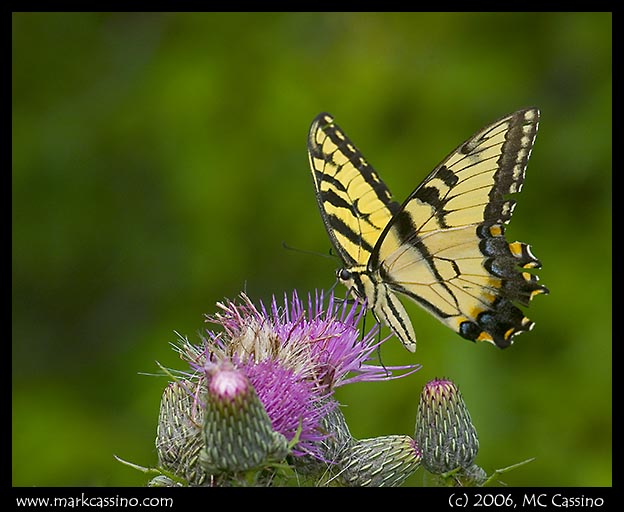 The evenings have been cool up here in west Michigan, and this is the time of year where there is one last flourish among the insect populations, and then they abruptly drop off. In a month – six weeks at most – the dragons and butterflies will be few and far between

The day was cool, cloudy, and dank. More than humid – dank. The air was hazy and it felt hot even though the temperatures were hovering below 80 F.

I started out at 125th street, near the river. This always seems like it would be a good spot for dragonflies, but never seems to deliver quite like I hope.

Today there were no geese and no dead trout – and few insects other than small moths that I cannot identify. At the end of the trail along the river, where it heads upland and into a pine woods, I found a large bull thistle plant with two tattered swallowtails moving from flower to flower. One was pale and probably older, the other still had fresh vibrant colors in its wings. A got a few shots of them, plus a few shots of a blue dasher perching by the river. My ability to work with the dragonfly was limited since here was perching in the middle of a huge poison ivy spread. I don’t mind walking out onto the poison ivy, but kneeling down or crawling through it to get the right angle on the shot was just out of the question. 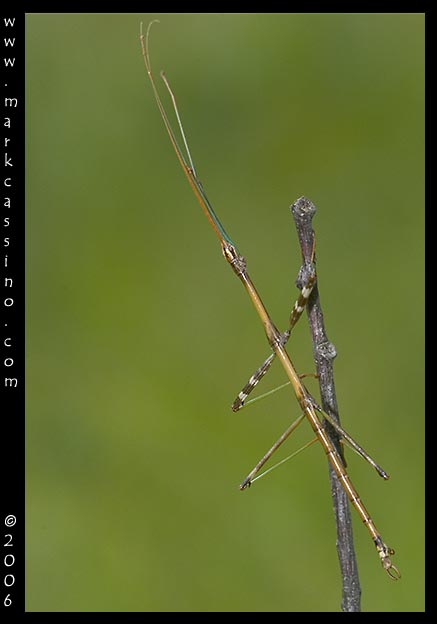 There was more to be shot along the river, but the batteries on my *ist-D went dead, and of course I didn’t bring a spare. The camera is pretty energy efficient, getting 1300 to 1500 shots per set of AA lithiums. So it’s easy to just forget about batteries and wind up being surprised when they do poop out.

I headed back to the car for replacement batteries, and decided to move along while there. I net hit one of the artificial oak savannas a short way down the road. As with the week before, there was one butterfly weed plant, still blooming this late in the season, but unlike the previous week there were few butterflies on it. Maybe one very tattered spicebush and a few tailed blues and coppers. I found one capper in a strange and listless position, and realized he was in the clutches of an ambush bug. Well, that’s the natural order of things, but I like the perky little copper butterflies, tiny dime sized creatures who stake out and defend their territories, and while the ambush bug has every right to eat, I’m always sadden to see a thing of beauty taken by them.

After spending some time there – most of it probably fruitlessly shooting the savanna in B&W – I moved on again. This time I hit a clearing deep back in the woods, an area where karners and dragons are sometimes found, sometimes not.

It looked like slim pickings on this day, but then out of the blue I looked down and saw a walking stick just sitting on the top of my camera. This was a real treat for me, since I had never seen one of these in the wild before. Apparently they are not particularly uncommon, but rather live out their lives at the top of the trees, out of sight and reach. 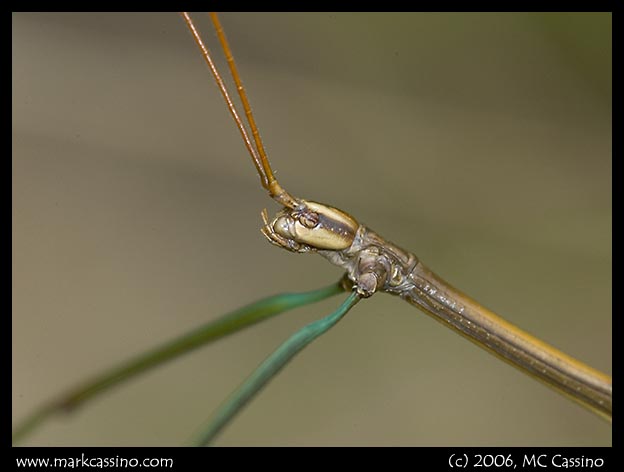 After getting a few shots of the walking stick – including a close-up portrait of its head – I moved on for the final stop of the day, a field off 48th street. I almost said ‘a new field’ because it is a new spot for me. I’ve driven by it several times but, like many un-visited areas in the forest, never pulled over. So I stopped at this new place. It was mid afternoon, still gloomy. This field had some sort of tall grass growing in it, and was extremely sandy – with whole areas of just open sand, fitting for a beach. Maybe it was the time of day, maybe it was the weather, but there wasn’t much happening here. I did manage to get one nice shot of a living American Copper, staking out his territory on the edge of a sandy waste.

When I got home I was surprized to find an adult ant lion, stuck in the remnants of a spider web on my back door. I pulled it out of the web, and snapped a shot of it on my thumb before it flew off into the back yard.

And that may do it for the Allegan forest for a few weeks. I have other plans and conflicts in my schedule - I hope to make one or two more trips before the hunting season starts, at which time I’ll move on to other areas. 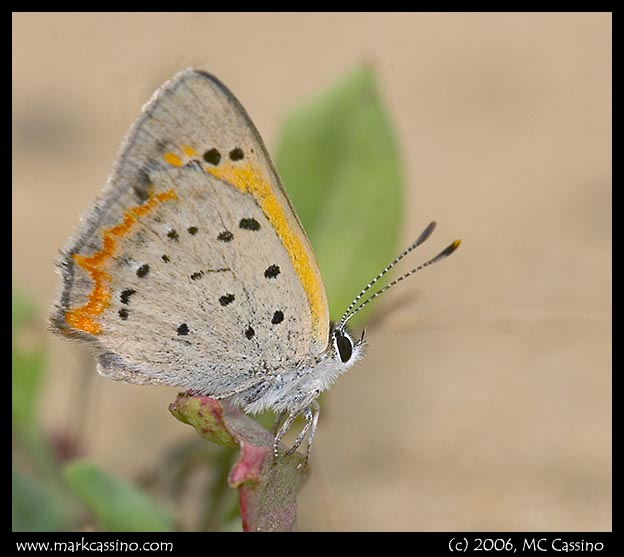 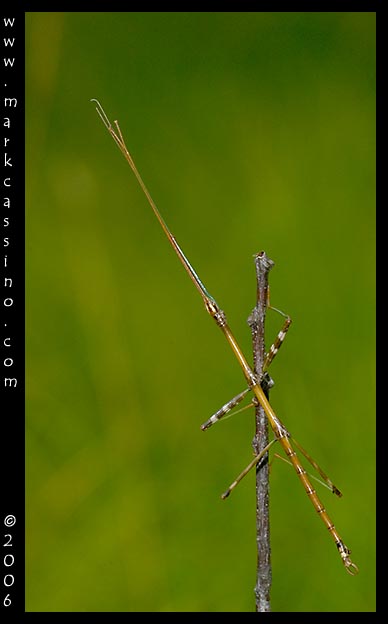 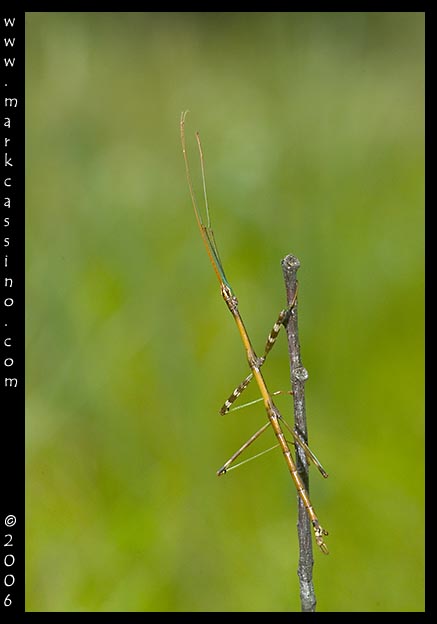 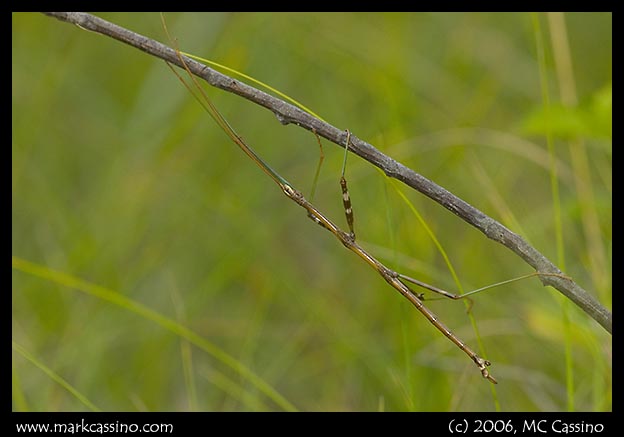 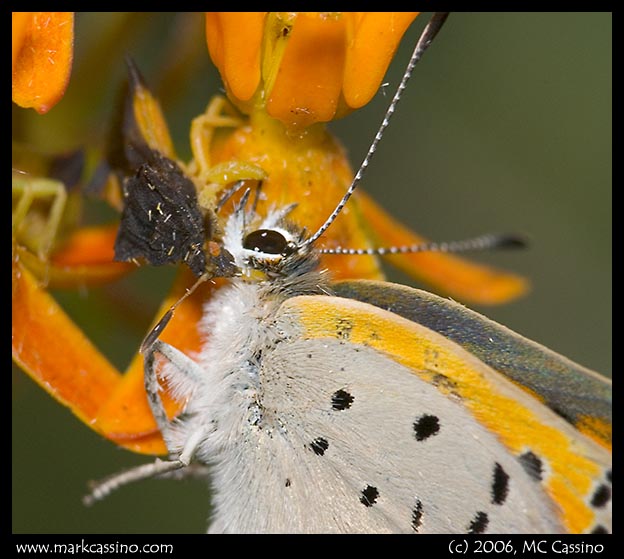 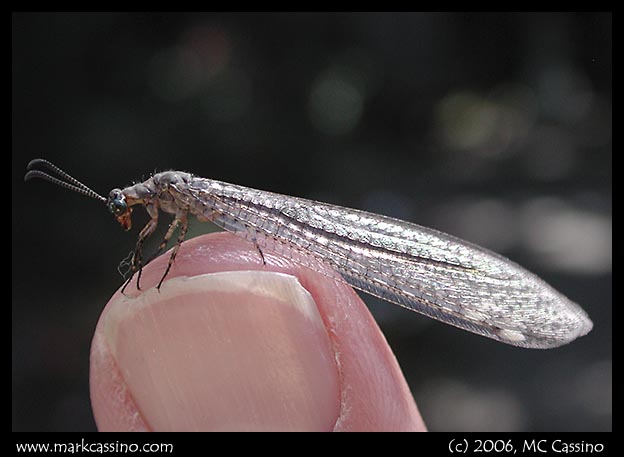 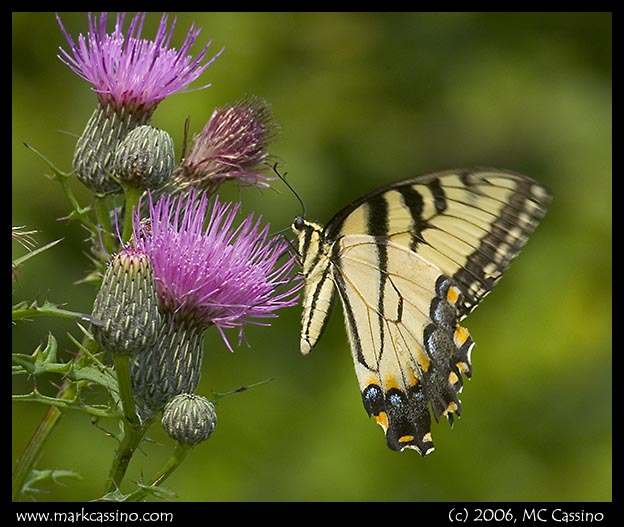 nice work, as always of course. the walking stick is special.
and the antlion on thumb. aside from the joy of playing w bugs, fotos w bug on human, i think, give the clearest indication of scale.
course, the joy can be relative. i met a meat eating grasshopper 2 years ago. got a few decent images but had to let it go so i could stop the blood flow.
yer sadly right about the seasons. city bug life should be picking up in a week or so, short boom then nothing. i need to find an out of town spot soon too, before that’s gone.