Here’s a passable shot of a Black Rat Snake (Elaphe obsoleta obsolete). It's a near miss - almost, could of been good, but not. That blinkity-blank blade of grass poking up in front of the snake's nose, ruins what otherwise would be a nice portrait. To my eye, that one blade of grass really tanks this shot. 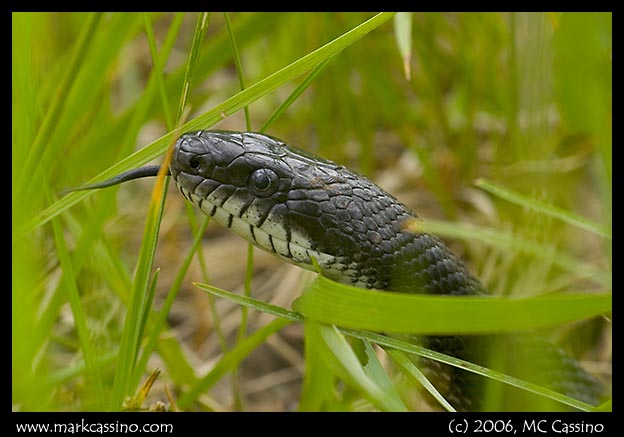 don’t often see Black Rat Snakes, so the chance to shoot them in the wild is pretty uncommon. This one was particularly nice, because it was so big. I’d estimate its overall length at approximately 6 feet. I was in the Allegan Forest, trying to photograph insects, and was stumbling around a Honeysuckle bush hoping to get a shot of a tiger swallowtail butterfly. I did not get the shot, and amazingly did not trample this snake who was just laying in the grass, watching me. The snake was incredibly docile, and I actually pushed aside some of the grass in order to get down to eye level with in, in hopes of getting a decent shot.

If only I had looked more closely at the LCD after shooting! Oh well… Since this follows on the heels of another snake shot, I dipped into the archives and pulled out one where I managed to do it right. This Red bellied Water snake was sunning itself on an early spring morning, and once again I got down to eye level (literally laying on the ground) to get a portrait. The water snake was not as docile as the Rat Snake – after a few blasts with the flash he came charging at the camera. Looking through the camera’s finder, there is something rather primal about the sight of an open mouthed snake striking out at the front of the lens! 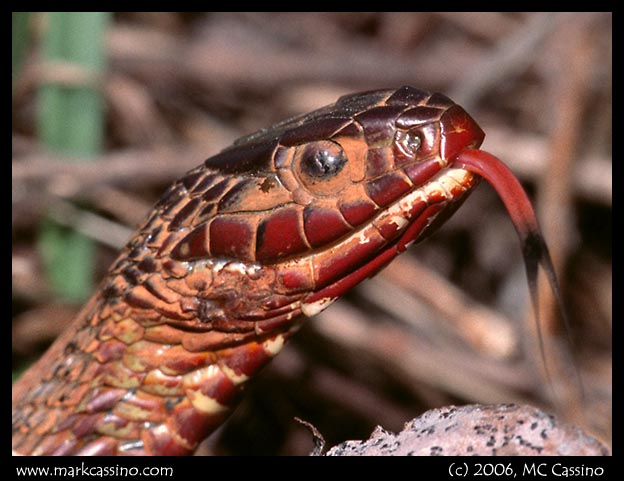 The water snake was shot on slide film, the rat snake on a DSLR.

All of the snake shots (these plus the Hognose) were taken with the insect photography setup described elsewhere. With snakes, and other herpetological subjects, the reach of a 200mm macro lens certainly comes in handy!

This entry was posted by Mark C and filed under Herpetological Photography.