Spent some time visiting the Charleston, South Carolina area last week. It was a nice change from Michigan's snowy March! Here's a grab shot of a little alligator (maybe 4 to 5 feet long) sunning itself on the edge of a pond at Magnolia Gardens:

Yesterday I visited a favorite pond in the Allegan Forest. For years I knew the pond as a seasonal marsh which went dry every summer, but over the past decade or so it has steadily filled up with water and no longer goes dry. It is host to an enormous number of dragonflies and also frogs, toads, turtles and more. Periodically, a huge number of these tiny toads flood the grassy savannah near the pond: 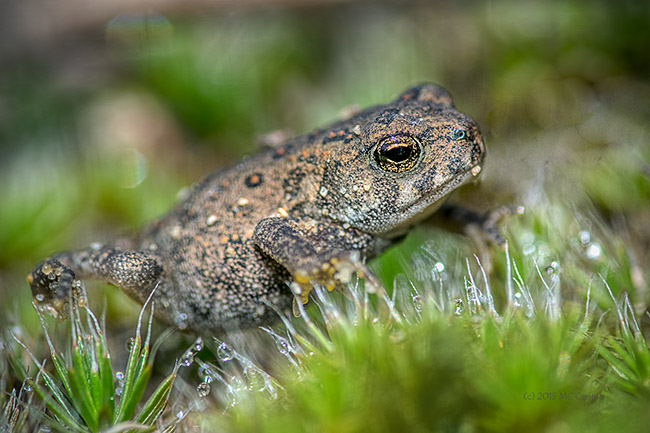 This is an Eastern American Toad, Anaxyrus americanus. It was quite small, roughly comparable to a US one cent piece in size. Here is a very crude comparison shot:

The field was teeming with these little toads yesterday, something that happens now and then in late spring or early summer. There were literally thousands of these tiny creatures making their way through the fields and into the adjacent woods.

Yesterday was World Pinhole Photography Day and I was in the Allegan Forest taking pinhole photos, of course. NO word on how those have come out - still waiting for the color film to come back from the lab, and just getting started with scanning the B&W… But, standing in a clearing I looked down and spotted this lovely golden colored Hognose snake, resting in the warm afternoon sun.

I didn’t thinkt hat an 8 second exposure would do the trick, so I switched up to the Pentax K-5 and A* 200 macro lens. The snake was small - just under two feet long - and it gave a nice show as it slinked away. So - tongue up, grass blade up: Tongue down, grass blade down: It’s mid July and the long sweet days of summer are upon us. I haven’t had the chance to blog much these last few weeks, but still I carve out a few hours on the weekends to visit the Allegan Forest and mark the passing of the season.

A midsized pond located in a field of 48th street is a frequent destination during these visits. When I first started photographing in this area the pond was just a vernal marsh. In 2006 it even dried up enough that I could walk through it. A mucky spot with a few reeds was the only sign of the water then. Now it is dozens of yards across and full of open water. Many larger trees have their roots submerged, and have finally succumbed to the rising water.

The pond is home to lots of odes (odonates), but also many frogs and toads. Usually, they scatter as I walk along the water’s edge – green frogs in particular cry out “eeeeee!” and then jump out into the water. Below is one green from that was unimpressed by my presence, and let get me get down to eye level with it for a portrait. As I mentioned, the pond also hosts a large number of Odonates. Here’s a very large damselfly – these are about two inches long and are very numerous around the pond. I don’t know what kind of damsefly it is, and my field guides don’t show anything this large in Michigan (at least that I can find.) Meadowhawks arrive at the peak of summer. It’s great to see them appear in their crimson glory. So far this year I have not seen any red ones, but it is still early. I have, however, spotted a few of immature meadowhawks – signs that the red dragons are not far off. Here’s a shot from this morning: Of course, as the days progress the spring dragons start to waiver. This year’s cold and wet spring meant that many early dragons appeared later than usual and many are lingering longer than usual as well. Of course, some – like the dot tailed whiteface – will be around for several weeks yet. Here are three spring dragons taken on earlier trips in recent weeks. First, Dot Tailed Whiteface: And lastly, a four spotted skimmer: While the water level in the pond remains high, the last few weeks have seen little rain and the field is taking on the burnish of the drier months of summer. I hope to have some summer dragons – brilliant red dragons – in the near future.

(Note: I had previously mis-identified this as a Fowler’s toad. Given the spots on the underside, this clearly is a very young American Toad, Anaxyrus americanus.)

I’ve been seeing these creatures in the Allegan Game Area, and since they like woods and fields with sandy soil, that seems like a perfect habitat for them. During today’s visit I saw 5 individuals within a few moments of arriving at a sandy field. Here’s one shot: Sunday. Walking back towards the car after wandering through he fields north of the Kalamazoo River, I look down at a small ribbon the ground, barely clear of the front of my boot. The intricate pattern on the speckled band is intriguing, and I wonder who left a snippet of a patterned shoe lace here.

And then the band suddenly moves – it’s a tiny Hognose snake, barely six inches long and lucky that my foot didn’t fall smack on it. The little serpent proved to be an interesting photographic subject. Most of the hognose snakes I’ve seen have been brown with darker spots and a light yellow underside - like this one - but this individual is a gray tan with black spots. The snake was patient with me as I snapped a few portraits from different angles, and then I finally left it alone. It slowly made its way along the sandy soil, and was last seen sliding into a patch of thick ferns. If it can avoid becoming a meal to some larger predator, it should have an ample supply of crickets and grasshoppers these next few weeks. Let’s hope it grows to be a formidable serpent - and I’ll hope to meet it again someday.

Sunday turned out to be a good day for herpetological subjects. After leaving the little Hognose Snake I made my way through several fields and finally down to the old farmstead. The mowed field was full of dragonflies, but they all dove low and clung to the stubble that prickled up from the sandy soil – not many opportunities for nice perching shots.

I made my way down to the pond. The water has receded a bit, though there is still open water at least 20 yards in from where the edge of the marsh used to be. Several frogs jumped into the pond as I bumbled down to the water’s edge, but looking down I noticed this green frog already in the water: I have to admit that I paused for moment before laying down in the muck to get its photo. If you look closely you can spot a few mosquitoes on the frog’s head – though they are pretty much lost in this web-sized image.

After that I hiked back up to the north end of the cleared field. I tried to stay by the edge of the field, where there are still some patches of long grass, but ultimately I got no dragonfly shots. I guess the dragons are telling me to move on.

Anyhow, I did find another small tree frog or toad way up at the north end of the field. I’m seeing these guys all over the place this year. After a bit of digging, They must be pretty young because they are typically described as being at least 2 inches long. One thing about these guys – their camouflage is outstanding. Take your eyes off them for an instant and they are lost and gone. Finally – one shot with a quarter in it for size reference. The little toad was quite accommodating. Sometimes I can’t think of anything to do. I get out into the woods or the fields, but can’t tell my left hand from my right. I bump along muddy dirt roads or down sandy two tracks, oblivious to the things around me.

I did manage to spot another tiny toad – this one a few hundred yards from the pond where I saw the last one. It was no larger than the other, but was much more animated as it made its way through the dried and cut up grass. Other than that – one yellow dragon and one red dragon, and that was the whole day Sunday… When I was a youngster my family lived on the edge of a hill. The land dropped off sharply at our property line, made a quick descent of 30 or 40 feet, and then flattened out again. A small drain ran along the bottom, and on the other side of this drain was the back of a shopping center and a small railroad switchyard. The side of the hill was overgrown with trees and brush. It was also littered with old tires, a junk washing machine, rusting barrels, and other rubbish. My family called that little strip of semi-wild land “The Gully.”

Cricket Frogs were common in The Gully. As children we’d find them regularly in the summer – so regularly that they became a pretty common-place feature of our world. Once or twice I tried to keep a cricket frog in a terrarium – it never worked out. But they were more or less taken for granted back then.

I don’t know when I last saw one.

I thought I saw one last week, but was wrong. I was in the Allegan Forest, by the edge of the New Pond. The water has been receding and now a few feet of mud boarders the pond. A very cooperative green frog has taken to sunning itself in one particular spot. I saw it there and knelt down into the muck to get a snapshot.

A bit of movement caught my eye, and I saw what I thought was a Blanchard’s Cricket Frog. The tiny amphibian was less than an inch long, and I had to get close with my insect macro rig to get a shot of it. Here’s a photo with an SD Memory card for scale: I was pretty excited about possibly finding one of these now uncommon creatures. But once home I looked at the photo and realized that it was really just a really small toad. I didn’t know smalls could be so small – I guess this one metamorphosed from a really small tadpole.

Here’s a shot of the samll toad toad without the memory card: Well – the experience brought back some nice memories. The last toad I saw – a few weeks ago – was about the size of a baseball. It did not seem to like the attention that I paid it, and slowly but surely dug itself down into the sandy soil. It just sank in, as if the earth was just water and it could float a bit lower if it wished. It was many time’s the size of this little creature.

Here’sthe green frog (shot the week before) that I was originally going after: