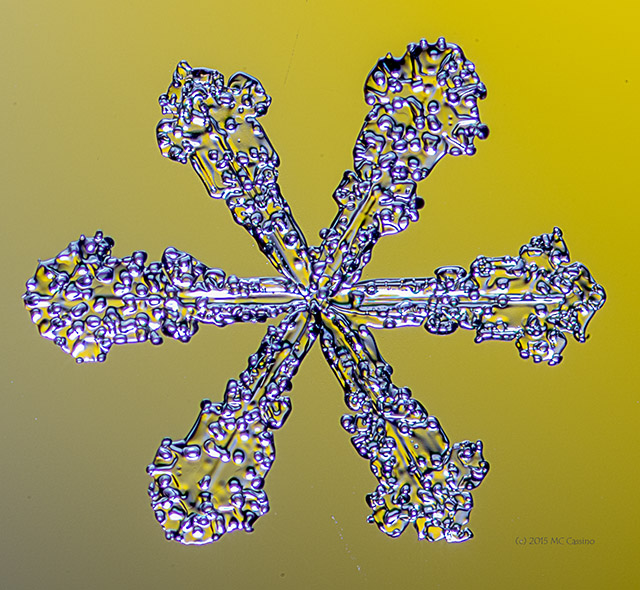 We had a few hours of very light snow yesterday. Unfortunately most of the snowflakes that fell were rime encrusted and  poorly formed - like this one.  I tried to use the opportunity to experiment with lighting the snow crystal with a yellow light source. For reasons unknown to me, this crystal took on a blue hue, while the golden light filled the background. Maybe it is an artifact of the camera's white balance adjustment, especially since the multi white balance feature was enabled and may have tried to compensate for what the camera thought was different light sources.

I light these crystals with a flash mounted below the subject. In a few cases - when the snowflake is opaque and the light cannot pass through it - a slave flash is added above. The flash is the sole source of light when the image is taken, to minimize any effects of camera shake. Given that I use a simple tabletop tripod, and the that the lens is typically mounted on lots of extension, vibrations are always a problem. Instead of trying to fasten things down to be rock steady, I rely on the high speed flash to counter the effects of any vibration.

To color the flash, one or two of the colored "lenses"  from C6 LED Christmas lights are placed directly on the flash - like this: 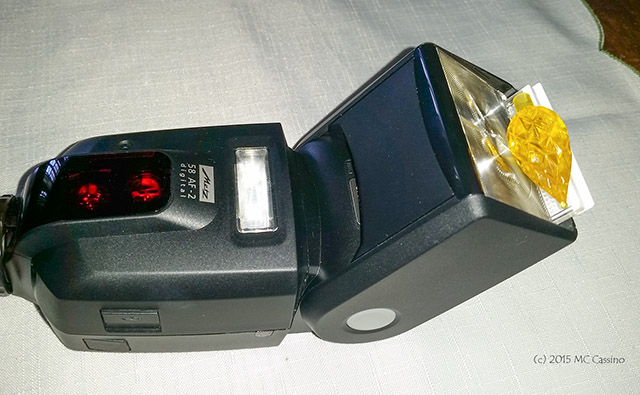 The gradient in the images is achieved by moving the flash slightly. Move the flash a few millimeters in one direction and the light will be dominated by the color of the globe. Move it a little too far in the other direction, and the color will be nil. But in the "just right" location, a nice gradient results.

The next possible snow here in Michigan is predicted to be later this week - hoping to continue with some experiments in lighting at that time.

The snowflake photo above was made with a Pentax K-3, DFA 50mm macro reverse mounted on extension and maual flash.