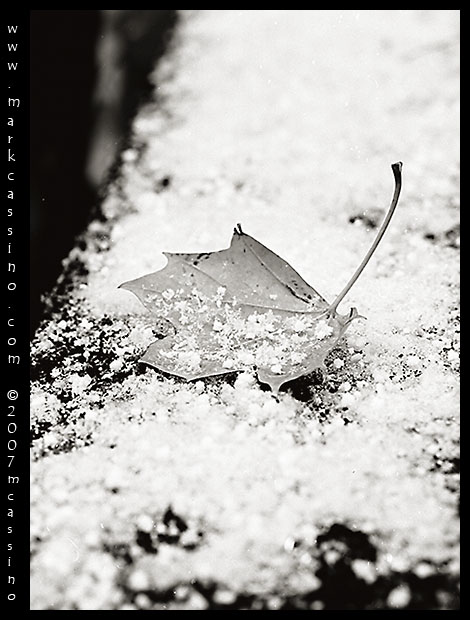 Why follow the straight path, when the crooked way beckons? Why contemplate things by daylight, when things hidden and dark can be glimpsed? Why do the easy thing, when something difficult can be under taken?

So go my thoughts these days…

Raking leaves this weekend, I thought it would be fun to take some shots of individual leaves in the pelting wintery snow. I wanted black and white shots, and I wanted a steely, high contrast look. I could have just shot things with a digital camera, converted to mono, and adjusted the contrast. But that would be too easy. I could of just shot the images on standard B&W film. But that would be easy. So instead I decided to shoot the leaves on lithographic film.

Lith film is meat for ultra high contrast images. High contrast means all black, all white, and no shades of gray. For my purposes I wanted pictorial images – the full spectrum of black to white. Up till now my only experience with lithographic film was part of one roll of Kodalith that I shot a year or two ago, and processed as a high contrast, lith film.

For this exercise I shot out the rest of that roll of Kodalith, and then switched over to Kodak Ektagraphic HC Slide film. The latter is reputed to be identical to Kodalith (I’m not entirely sure of that.) It is a ‘slide film” in that its intended purpose is for title slides for old fashioned projected slide presentations.

I shot out the remnant of the Kodalith roll on Saturday. I should explain that I when I shoot out only half a roll of film or so, I will often just put the camera in the changing bag, extract and cut off the exposed part of the film, and leave the remaining, unexposed, bits for later. I had done this with the first part of the Kodalith, and so it only took about a dozen shots before the partial roll was used up.

I rated the film and ISO 6, figuring that would result in a well exposed negative. I then developed it in HC110, Dilution G (1:119) at 20 c for 22 minutes, agitating every three minutes. This was just a wild guess on development , and produced a contrasty but scannable negative. The vertical photo at the start of this post is the one decent composition from this roll. 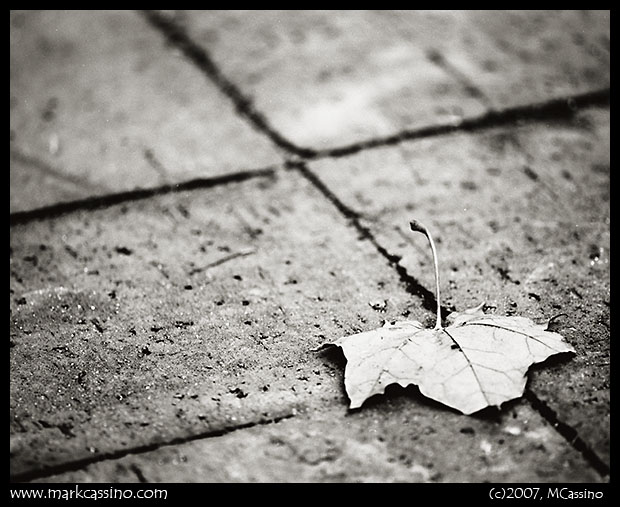 The results weren’t great, but were encouraging. I shot the next roll – this time Kodak Ektagraphic HC – also at ISO 6. This time I went with HC110 at a 1:200 dilution, leaving the time at 22 minutes, with the same agitation scheme.

One problem emerged. The film did not clear and fix properly. Shadow and midtone areas cleared fine, but the most dense areas of the film, the highlights, did not clear well. Emulsion remained in place, and despite a few successive baths in fresh fixer, the film did not clear. I should comment that while the Ektagraphic HC is nominally a slide film, the development directions call for development with D-19 and fixing in standard fixers. So I assume this film is somehow damaged.

No matter. Once the film was dry I dropped it on the light table and took a close look. The unfixed areas were transparent, and seemed to have decent tonality, even if they were a tinted emulsion color and not just oxidized silver. So I stuck them in the scanner. The results are not bad – the second, hoirzonal shot, is from this roll. The highlights – in this case the leaf – were made up with the un-fixed emulsion on the film. Ultimatley the light from the scanner did not care, and while these negatives are surely not archival, I don’t really care either.

I have another 4 or 5 rolls of the Ektagraphic HC in the freezer, and will do some experiments with other developers. Someday – but for now, I think I’m going ot take the easy route, and shoot some regular film, if not digital. 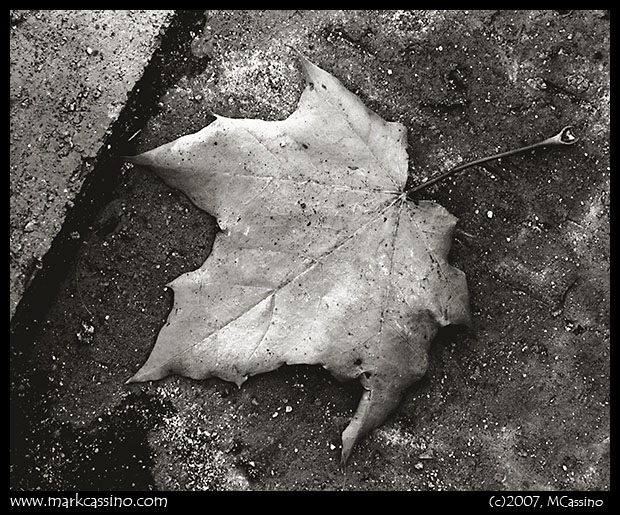 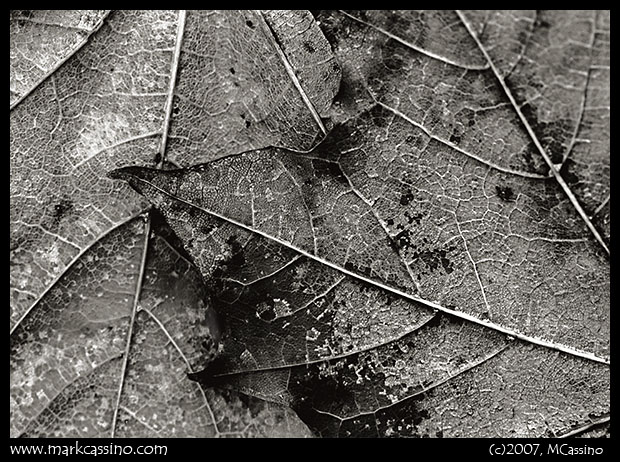 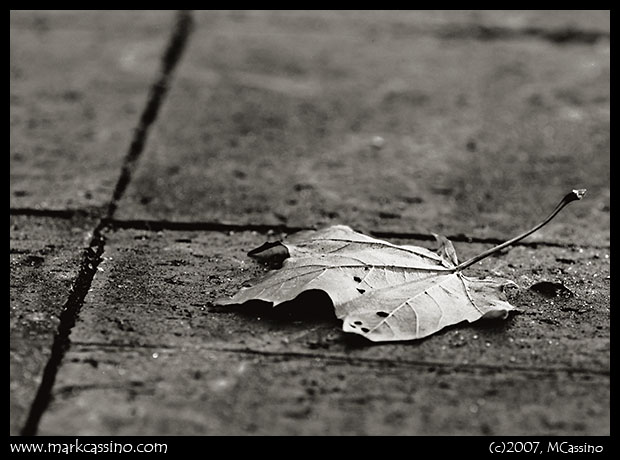 This entry was posted by Mark C and filed under Film Processing, Around The House.

i have used this film back in the 80’s the results i wanted was a
pure black and white photo, i got it using a & b developer as in line
copy developer in graphic arts. its real fun to sandwich the negetives
and print on a kodak cold paper. not sure if thats the result you
want but its very striking.

Thanks for looking, Linda. I was trying to coax a full gray scale image out of the film - hence the extreme over exposure and pull processing in a dilute developer. Since I have several rolls of this left, maybe I’ll give it a try for the pure black / pure white image - though pulling the curves tool in Photoshop to a straight vertical line will turn any digital shot into something like that.

Excellent shot, Mark - I’ll have to give some Diafine a whirl.

Hiya Mark,
I was wondering if you know of any suppliers who still make lith film for printing on, I remember back in my college days we had a box of lith film lurking at the back of the darkroom. I loved the process but it sems that Kodak have stopped making it and I was hoping that you may have come across it on your travels? Love the website.
M

Sorry - I don’t know of any place to get this anymore. I inhereted the few rolls I have. They are very old…

I’ve recently been interested in trying to produce extremely high contrast pictorial photographs. I have a couple rolls of the Kodak Ektagraphic film you mention. I’m new to developing film at home, so I’m wondering what I would use to get a high contrast image with little to no gray scale. Any suggestions?

It sounds like you want to use the film as it was intended – so just follow the directions as a starting point. I just checked and the technical publication for the Ektagraphic HC film is still on Kodak’s website:

You will need a high contrast developer – the Kodalith and D-11 mentioned in the publication are no longer made by Kodak. You could try D-19 or check out the Photographer’s Formulary which continue to makes a lot of old developers.

Of course – you could achieve a similar effect using the curves tool in Photoshop. In a B&W image make the tone curve very steep. If the curve is straight up and down the image should have just two tones – black and white. A very steep curve would preserve some mid-tones. But then… simulating an effect in photoshop isn’t as fun as achieving it on film!

Thank you, Mark! I will look into the D-19 and the Photographer’s Formulary.

Wonderful photos, by the way! I agree, film is so much more fun and challenging.

Thank you Mark for sharing this!

I tried it, it’s wonderful!

Here are the results :

The tonality is your images is really cool - high contrast, crisp, but with a steely sheen that adds a lot. Nice!

Here is a shot I took with a pinhole paint can camera, one hour exposure time:

Here are the few other shots I took with this film, more to come!

And here is the pinhole camera:

Thanks again for giving the recipe!

hello, i am a photography student in toronto interested in lithographic film. from what i understand, it is rarely ever used. my professor has even gone as far to say that i may not be able to find any for purchase. would anyone here happen to have information regarding the purchase of modern lithographic film? any help is greatly appreciated.

if you have any leads, please email me at montherday@hotmail.com