“If the little fox, after nearly completing the crossing, gets his tail in the water, nothing is accomplished..”  -- I Ching 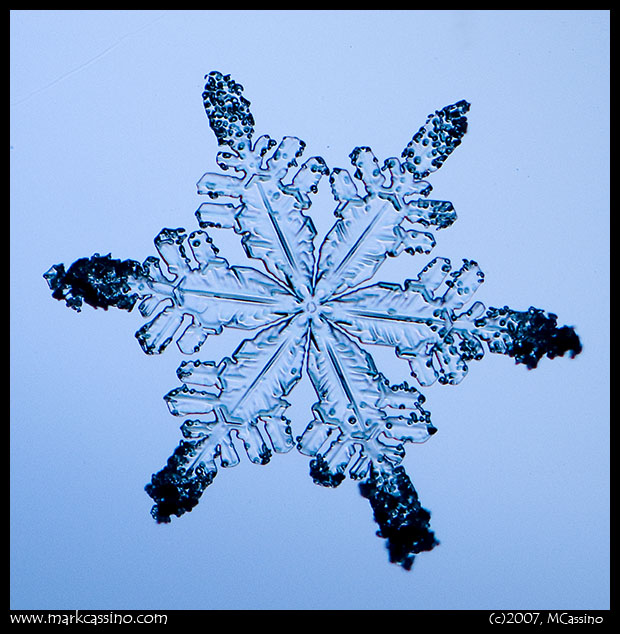 It snowed yesterday – the old snow of late winter. And though I had a head stuffed up with a cold, I spent the day outside in the chill, patiently holding out glass in the air, catching snow crystals, working with lighting in the garage.

Odds are, this is the last snowflake photography session of the season. I started experimenting with snow flake photography almost a decade ago (how the time flies!) and lookiing back over those years, I’ve only had one or two productive sessions after February. Looking ahead, the temperatures are projected to rise into the 50’s this upcoming week – and once it gets that warm, the good snow is gone for good.

Ah – but this last session was the best of the year, perhaps the only session of the year that was worth while. In a way, the 6 or 7 hours I spent outside in the chill yesterday was the ultimate result of the hours spent in the cold.

Perfect snow crystals are nice, but "perfection" is so limited. It is a trite, human idea (all too human) that ultimately simply mimics and mocks the truth. Perfection is the tyrant that demands conformity. Perfection is a pre-conception that stifles spontaneity and experiment. 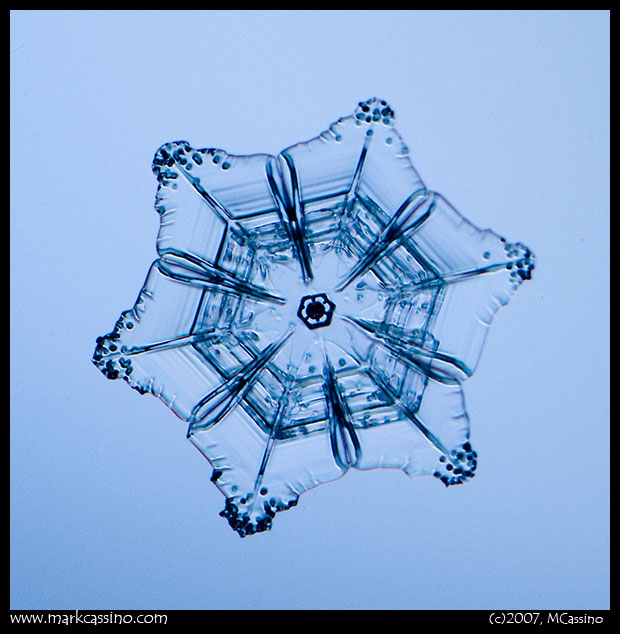 The truth lies in imperfections. The truth is the wrinkle in the fabric, the scratches around the key hole, the tarnish and scratches in the bright metal. And if photography is a means of searching for the truth, then photography must be liberated from the quest for perfection. All that perfection gets you is the pretty post card, the facile model, the tintype landscape.

Walking across the ice, like a little fox, perfection weaves a net of cracks and weak spots, traps for the unwary, places to get your tail wet.

When I posted about the second session of snow crystal photography for this season – back on December 8 – I prefaced the post with a quote from the I Ching – hexagram 64, Wei Chi / Before Completion (working off the Wilhelm translation). This is a situation where every line is in the wrong place, and by being so every line is in the perfect relationship to its corresponding line.

I don’t know why I put that line from the I Ching in that post – but looking back it suddenly makes sense – the concept of Imperfect Symmetry that I’ve been groping for in these shots is really embodied in that hexagram. And as Wilhelm notes, it’s a joyous and optimistic observation, despite the perfect imperfection of the figure.

But imperfection has yet more pitfalls. Too many trails head into infinite directions – and all of them are wrong. The greatest strength of chaos is that it is the default position – there are limited ways to be ordered, but infinite forms of disorder. 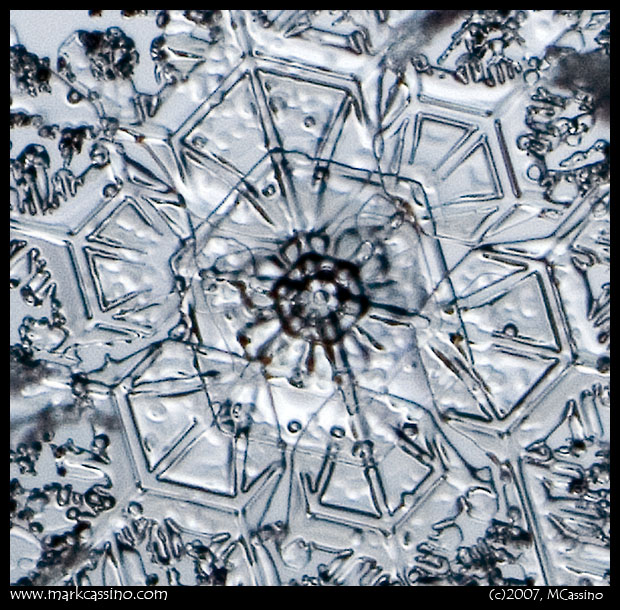 But looking at yesterday’s snow crystals, I finally see the balance of order and chaos that I’ve been striving for all year. The first crystal shown at the start of this post is like a battered shield – only 4 out of 6 dendrites still intact, one major gash in its side. It looks like a well worn shield – one that protected its holder against many an attack.

The next snow crystal is even more worn – and perhaps worn in an even more beautiful pattern. The diamond shape in the middle of this crystal suggests that it broke in two – perhaps briefly – and then fused back together. The cracks and other faults that run into it heighten this feeling of being broken, and yet repaired. The wear to the crystal’s overall shape, combined with the patina from sublimation, adds to the character of this snow flake. In many ways, out of all the hundreds of snow crystals I’ve photographed (a fraction of which wind up here on this website) this is one of my favorites – for all its character and for the story that this minute piece of ice tells.

Snow Crystal Mandala is another favorite of this session. It is a detail of the center of the image below, and while it is not round (like a proper mandala should be) it does seem to have the intricacies and circular pattern of at least, a mandala-like image.

Stumbling across this image was an interesting experience. A few weeks ago I was contacted by a musician – Echo Mazur – who is performing a piece inspired by the manadala image. She was interested in using some snow crystals images as projected accompaniment for a performance. I'm not sure which, if any, images she plans to use, but the idea was enough of a nudge to get me thinking about the mandala image and snow crystals. And the nudge lead to this shot. 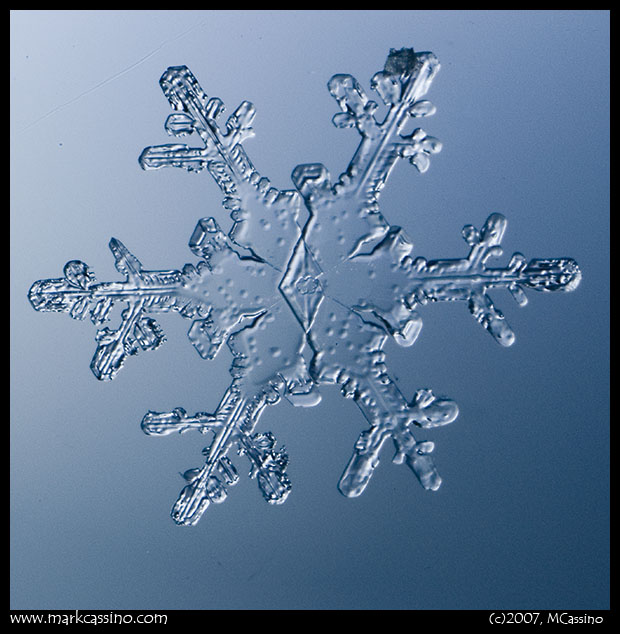 The final shot is one of the first of the day. A disk shaped snow crystal, worn around the edges, with a few air bubbles just percolating under the surface. The floret in the middle and the concentric bands in the disk shape remind me of the ripples in a pool of water after you toss a rock in.

I'm happy enough with this batch of photos to revive the "Imperfect Symmetry" moniker - first used with the 2005/06 snowflake photography season. So here we have Imperfect Symmetry II - it took long enough to get here, and in a fortnight or so I'll be shooting wildflowers, so fast is the earth spinning. 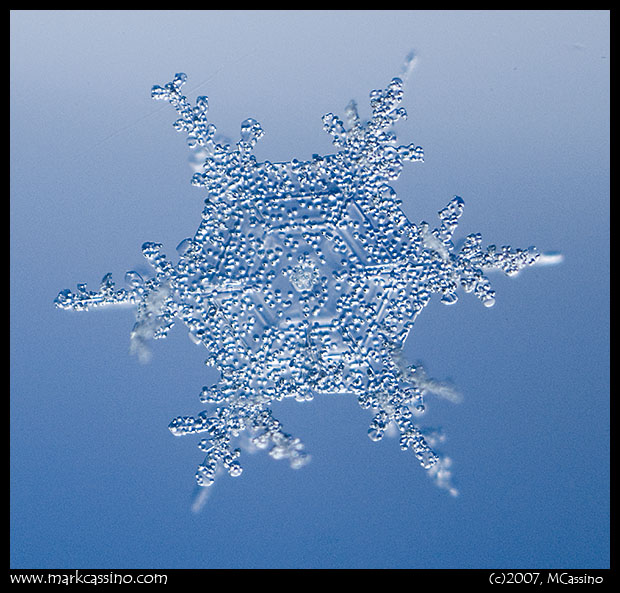 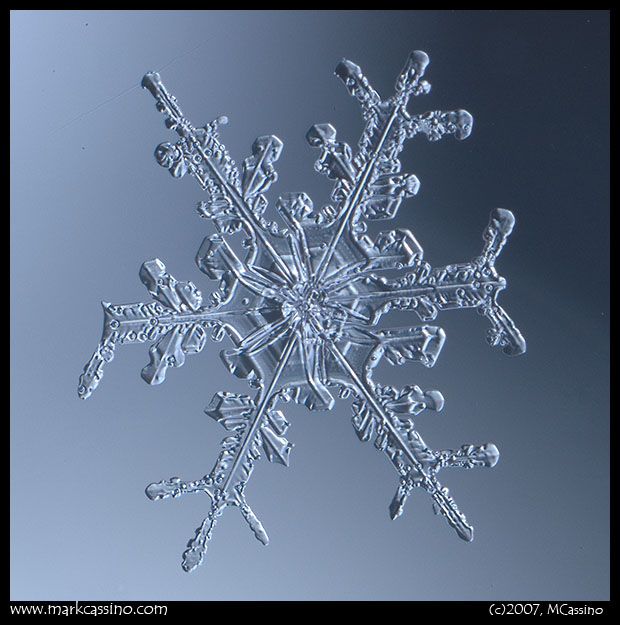 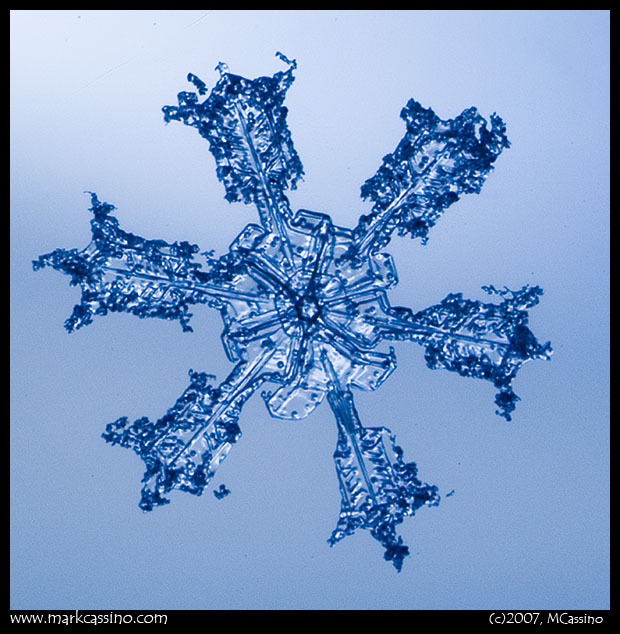 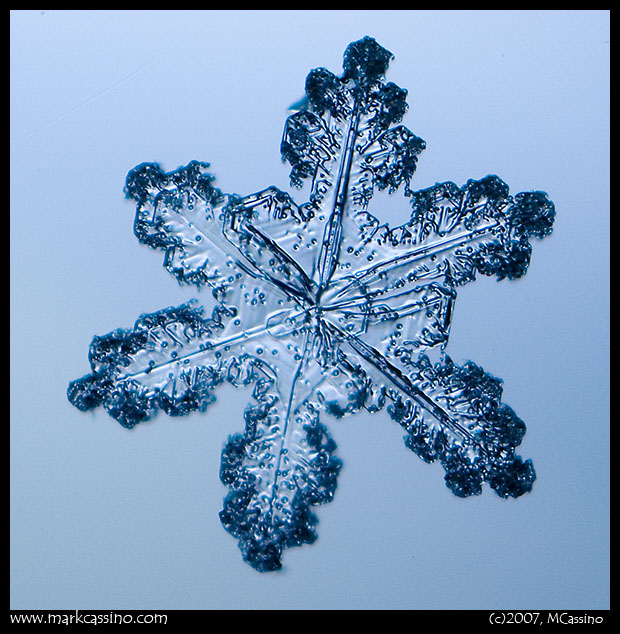 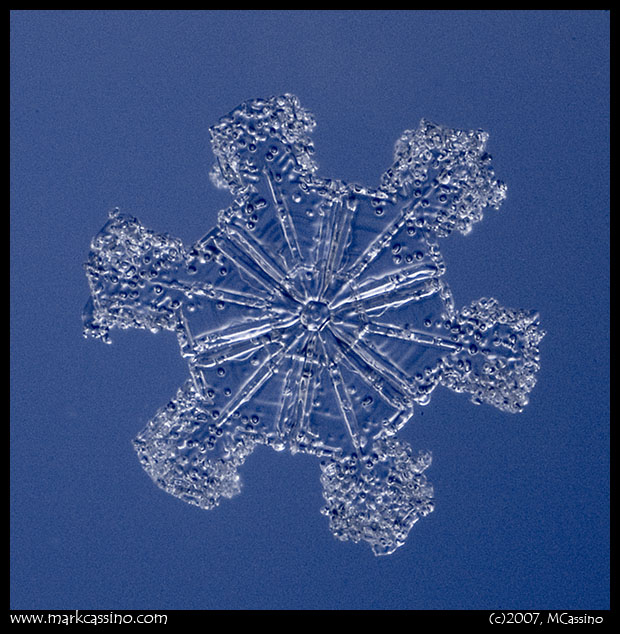 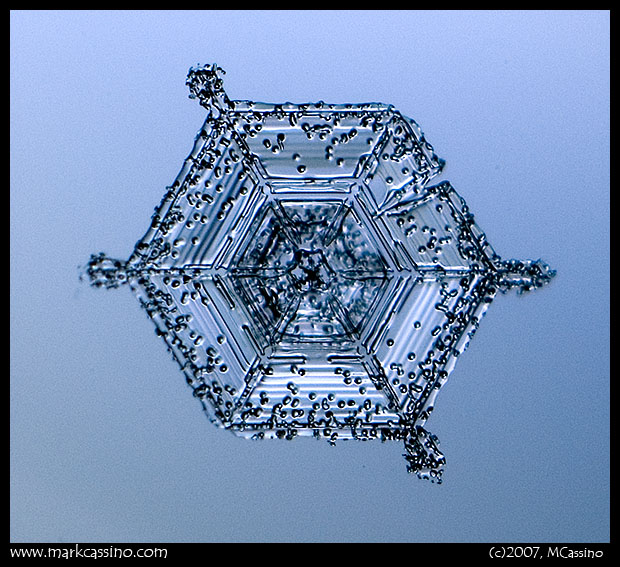 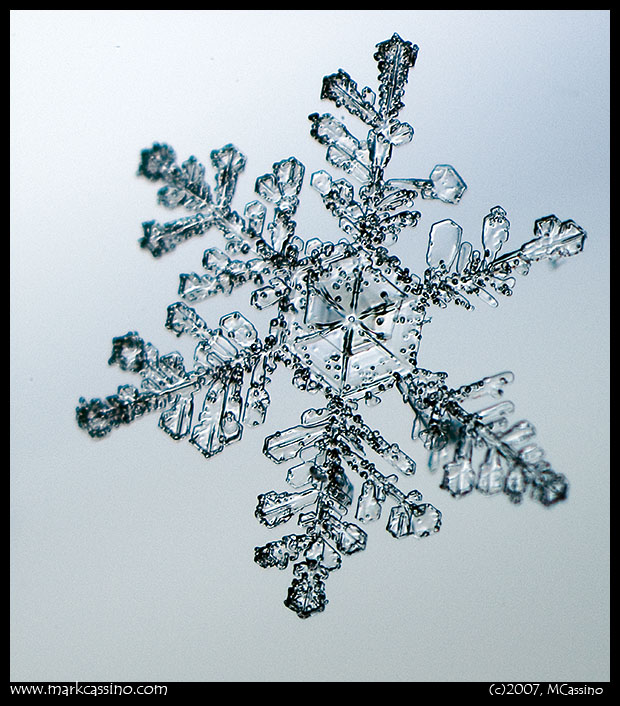 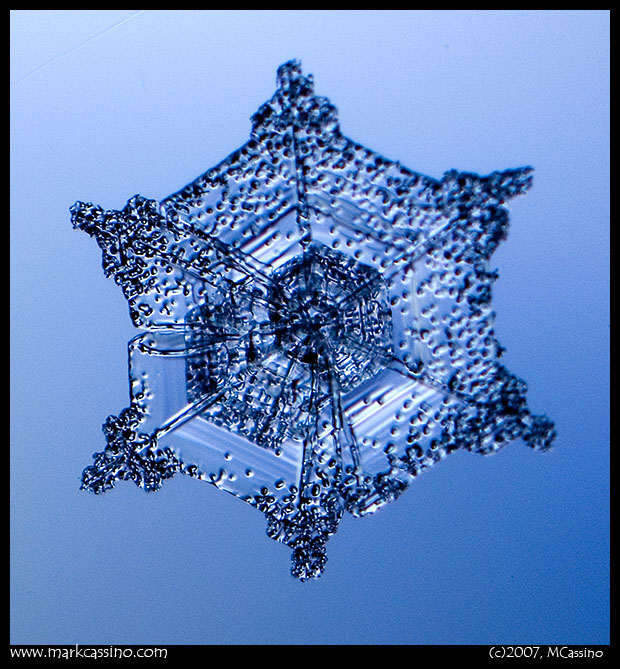 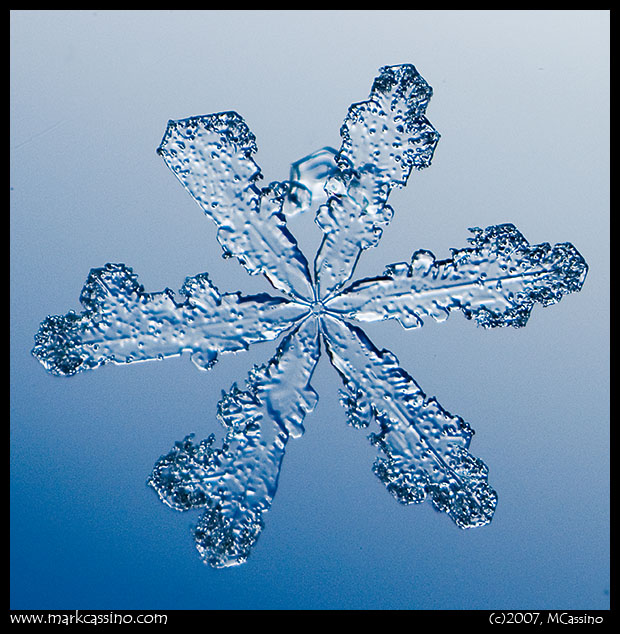 this is an amazing post. I feel as if you’ve snatched my own thoughts right out of my head and rearranged them to fit into language when you talk about the true “perfection” and beauty being found in the imperfections. Thanks so much for sharing your beautiful work with these snowflakes!

Hi… I was looking for “the chi of love” water photo, and I found your site. I fell in love with this photo… (the last one), the last shot, as you called it.

And I want it on my wall, big big… Where can i get it? do you have posters of your photographs?

Looking forward to hearing from you.

Ah, I live in Mexico, no idea where you are…

I do sell prints of my work - take a look here: