The seasons are changing with astounding speed. Just three weeks ago I was outside in the 25 degree temperatures, capturing the last snow crystal shots of the season. Two week sago I ventured into the Allegan forest, only to get stuck in almost a foot of wet, slushy snow on one of the side roads. 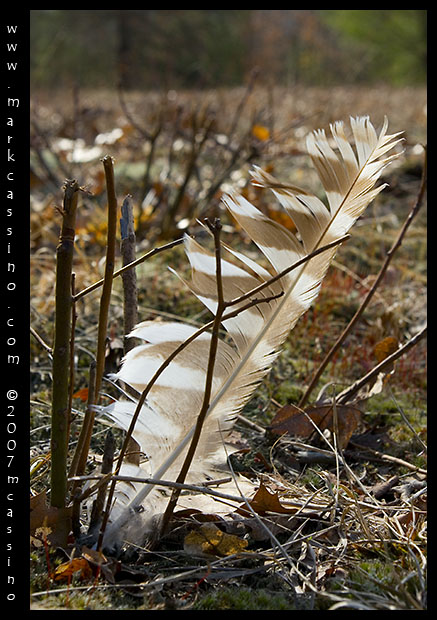 But then by the middle of this week I was able to snap a shot of a bee dancing in a crocus flower. Yesterday I ventured back into the Allegan Forest, only to find the snow all but gone – just a few traces lingering on the north side of hills and ditches. The roads were not only clear, they were dry, and very first blue hepatica already were blooming! Spring is indeed coming up fast.

I was glad to be able to get into the Allegan forest after the winter reprieve. While the small seasonal roads remained passable until mid January, once the winter snows began to fall in earnest there was no way to get back into the woods – at least not with my car. So the trips that I mad out there were all pretty superficial, just short excursions from the main roads, hikes back into the woods a bit. Usually I was walking (without snow shoes) in knee to thigh deep snow, which made even those short hikes difficult.

Yesterday I was able to venture back into some the Oak Savanna clearings. These are bleak places yet, but already the vegetation is starting to come to life.

The snow melt off was hurried along by a few days of heavy rains, so there was a tremendous amount of water run off. But the extremely sandy soil in the Allegan Forrest was already pretty dry. The thick moss that carpets the ground in many areas of the pine barrens was soft and spongy – by June it will be dry and crunchy. 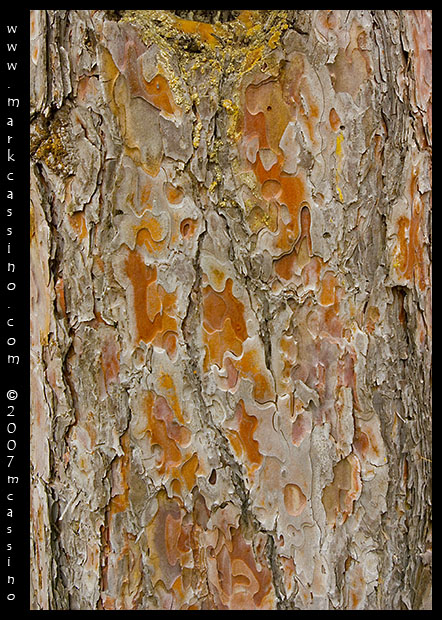 My first walk around was in a section of Oak Savanna north of the Kalamazoo River. It’s a great place to get photos of all sorts of butterflies and dragonflies in the summer, and is also the home to a lot of interesting birds and, of course, deer. There wasn’t much happening here on this day – I did fine a hawk’s feather jabbed into the ground, and a few other feathers and small bones laying on the ground. Perhaps an unwary hawk swoped in to scavenge a bite from an animal carcass, and was nabbed by a fox or a coyote.

I then followed the road back to a bluff overlooking the Kalamazoo river. It must be turkey season, because there were several hunters blasting away in the woods. At the top of the bluff I found that a tree that had been hanging onto the sandy hilltop had fallen over since I was last there. This is a spot where people come to shoot skeets and have bon fires, so it looks like there will be an good supply of wood for future fires.

In the pine forest along the top of the bluff, I became interested in the details of the bark of the pine trees. I took several shots,, trying to capture the patterns and sometimes very bright colors found in the tree bark. These were not typical pictures of trees – but a fun and interesting subject for exploration nonetheless.

I then made my way down the steep trail to the river’s bank. The water was well into flood stages and the trees in the flood plain made for another interesting photographic topic. 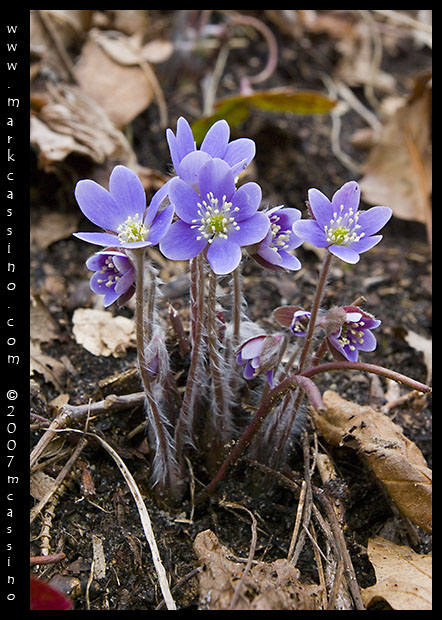 But then as I was turning back, I was surprised to see blue hepatica already flowering on the hillside I had just climbed down. I assume that the steep, south facing hillside warmed up quickly, resulting in the flowers blooming at this early time. I was doubly surprised because the Allegan Forest, as former farm land, there are few solid patches of woodland wildflowers there at all. And these hepatica definitely were a week or two ahead of what I’d expect, since the harbinger of Spring (a few samples of which were also found in Allegan) is just starting to bloom in Kalamazoo.

But it was a welcome surprise and I was able to snap the first wildflowers shots of the year. Given my work schedule I won’t be able to devote the time and effort to wildflowers that I would like. But – I’ll be pursuing them as much as possible.

After leaving the river I made stops to several other areas within the forest. Like I said, the snow was gone but there were still several large mud patches in the roads. I delt with these by just revving up to 40 or 50 mph, and plowing through them - relying on the momentum of the car to carry me through the muck, which in several cases was deep enough and thick enough to snag the car.

I didn’t see any bees, and the first dragonflies of the year are probably just in the process of migrating up from southern Illinois and Indiana. But – they will be here soon.

Other photos from the day: 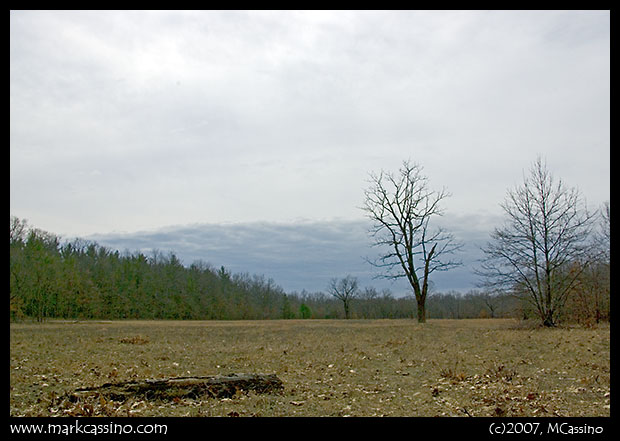 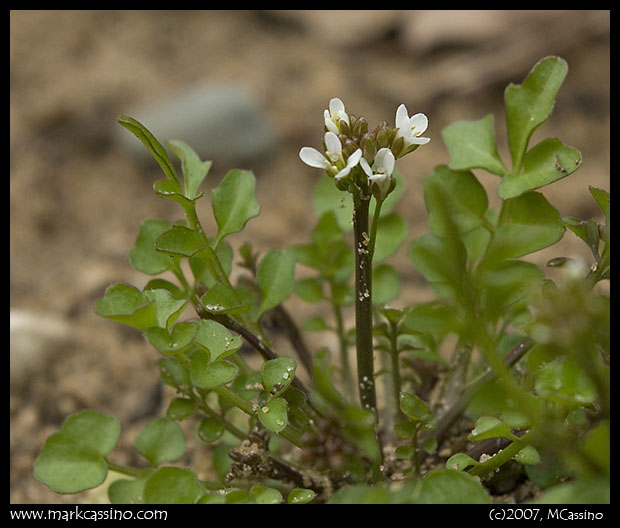 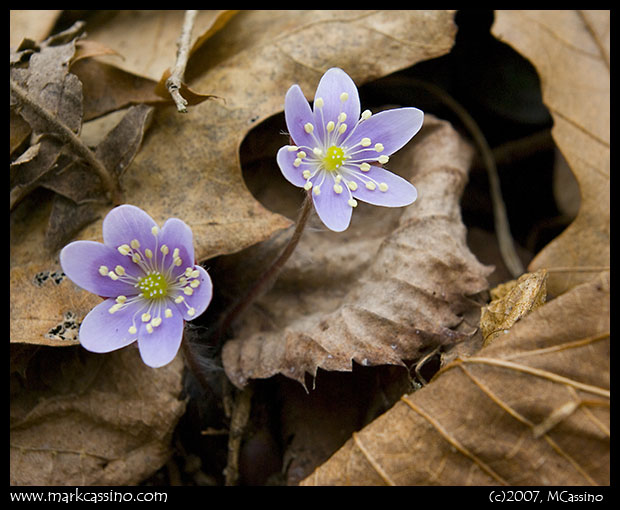 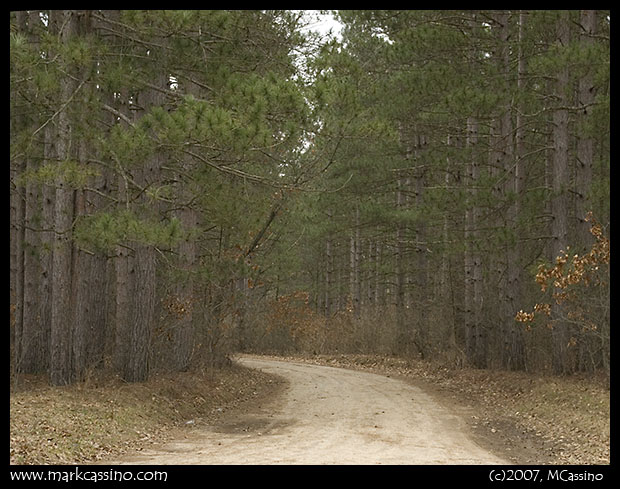 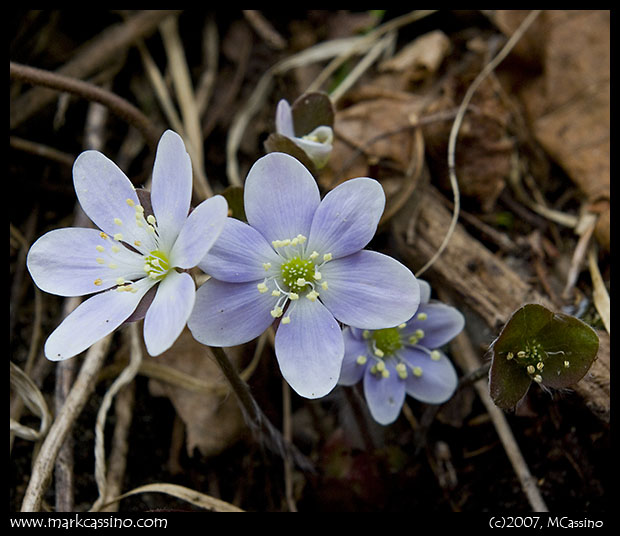 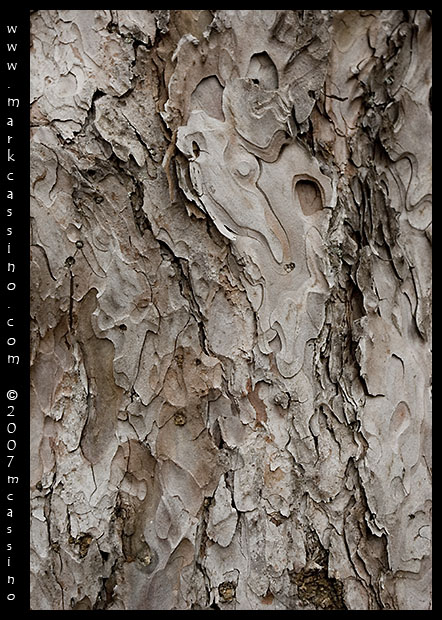 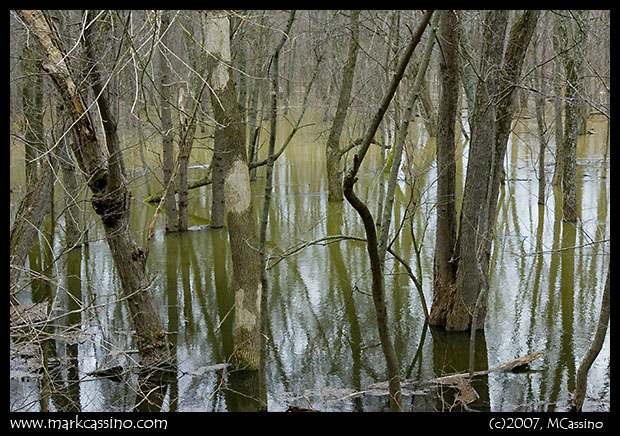 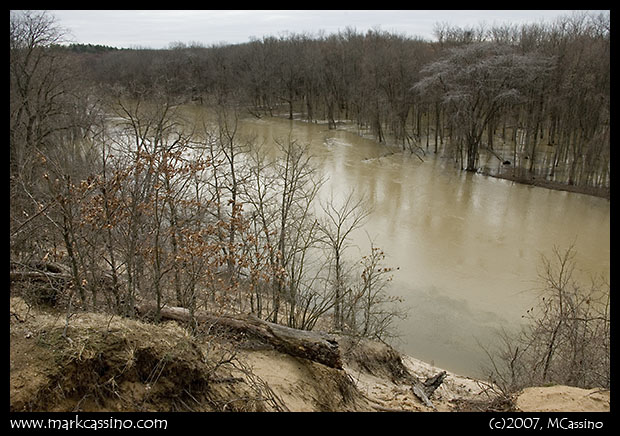 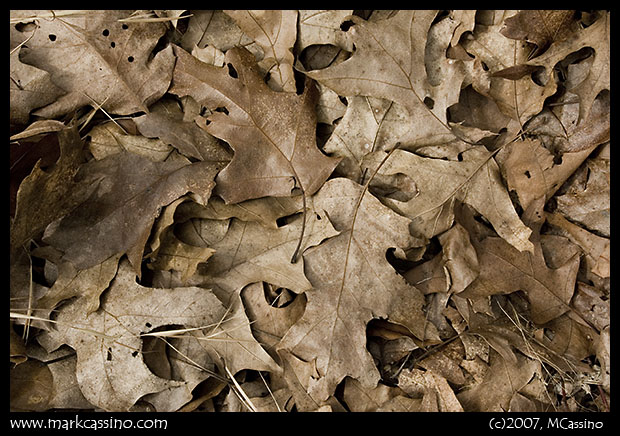 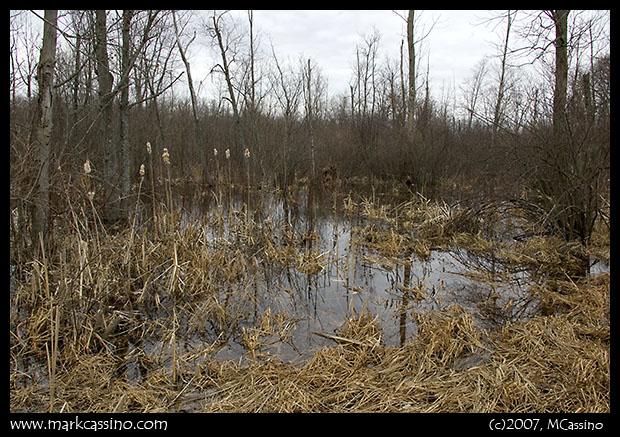 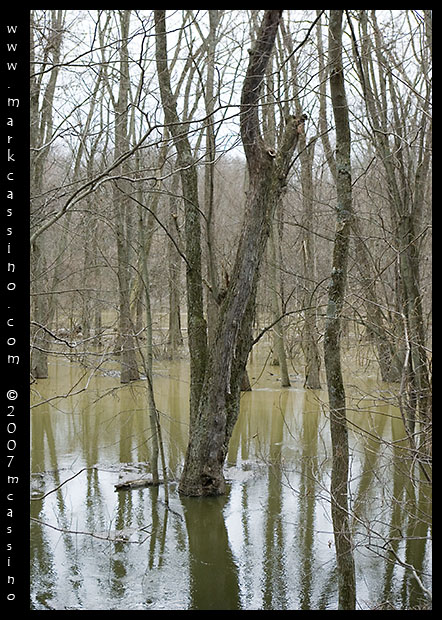 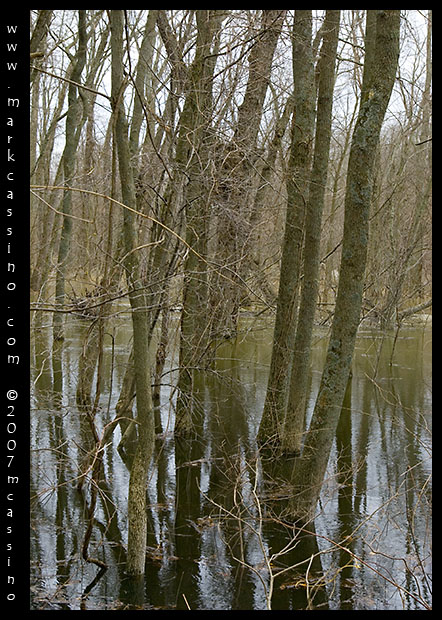 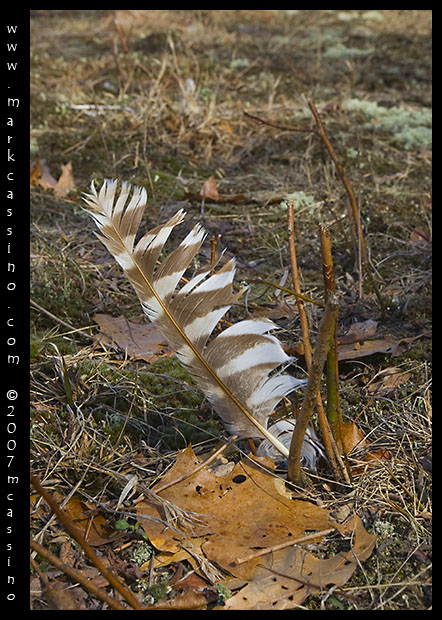 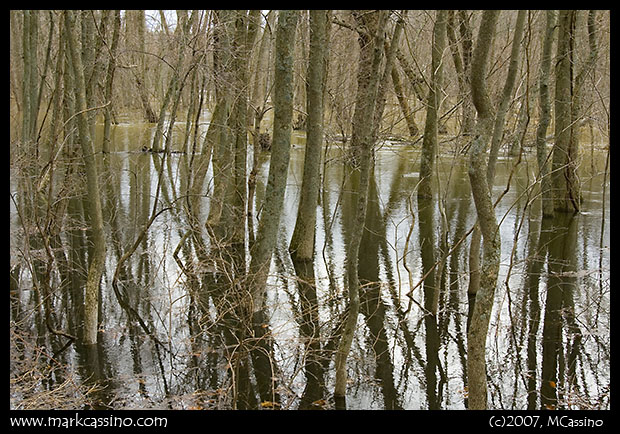 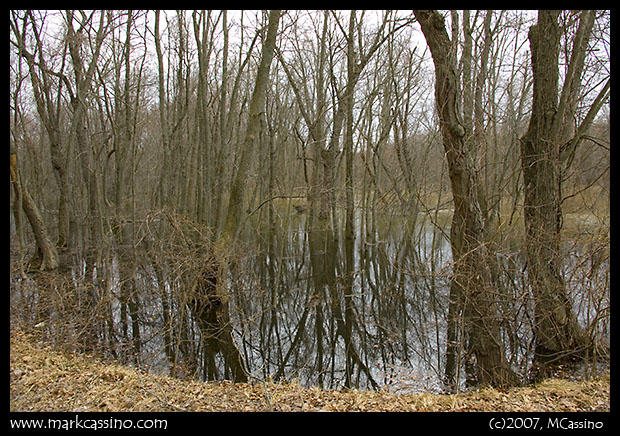 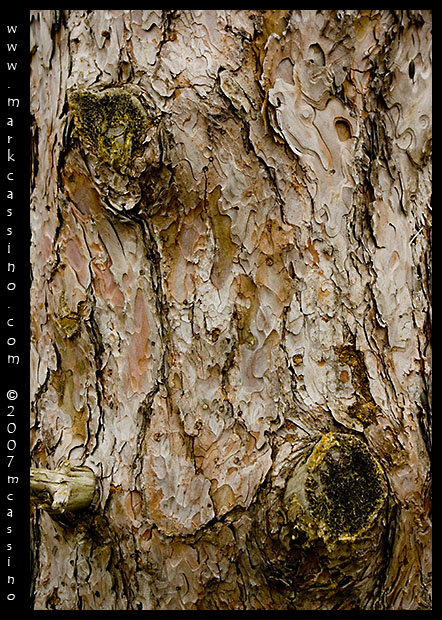 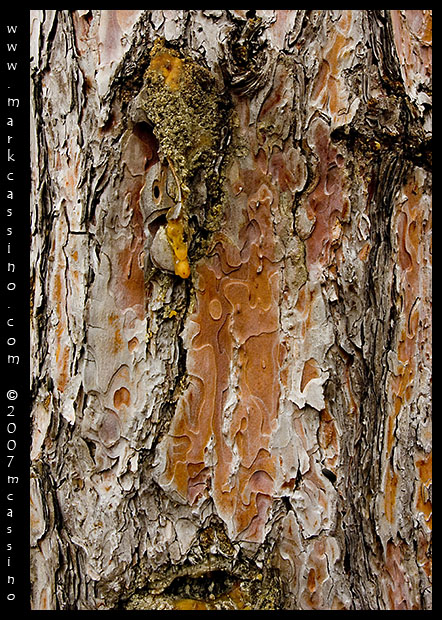 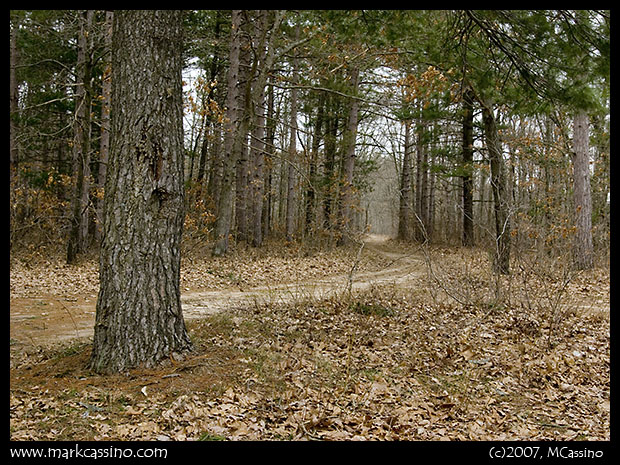 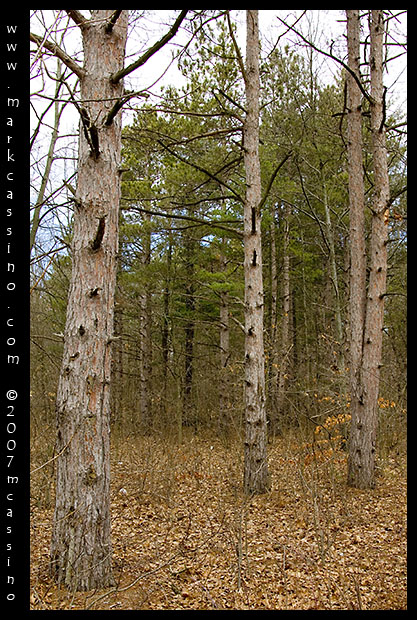 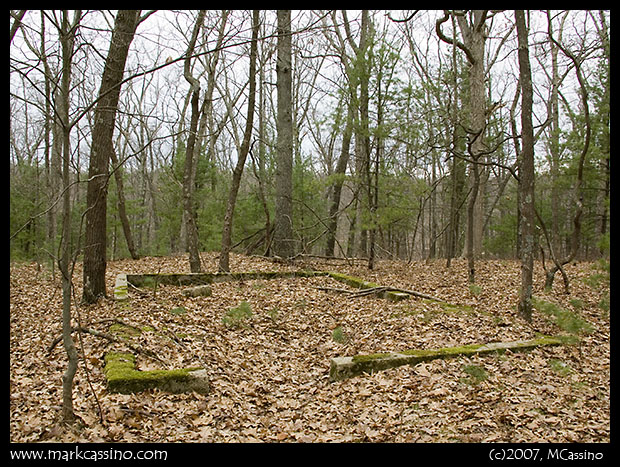 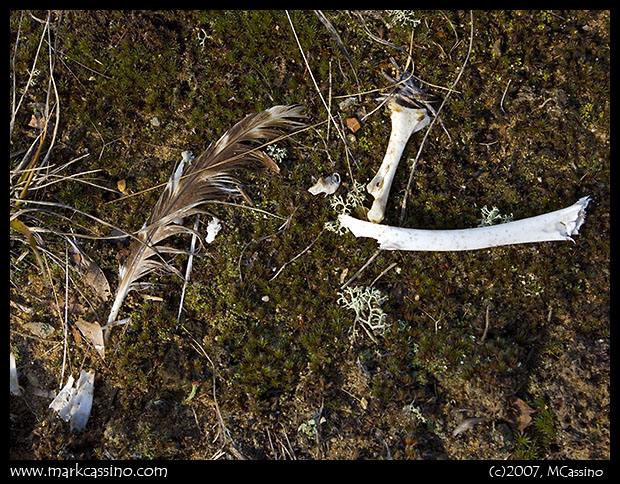 This entry was posted by Mark C and filed under Photo Comments, Wildflowers, Landscape Photography, Pictures Of Trees, Midwestern Landscapes.