Worldwide pinhole photography day came and wnet about a month ag0 - April 28th. It was a rainy cold day and I made a desultory trip out to a nearby geographic formation called the Devil’s Soup Bowl. Old Scratch didn’t shine any light on anything and I wound up just taking a snap of an old guardrail in the woods, and then went home. Here’s the pinhole shot: Here’s a picture of the pinhole camera: April 29th was World Wide Pinhole Photography Day - a great event that keeps me shooting iwth a pinhole camera (if only one day per year.) This year I took to the field with the Peinhol Body Cap for the Pentax 6x7 and with my trusty converted Kinoflex TLR. It has taken some time to scan all of the film, and I can’t say that I am really thrilled with anything, but what the heck, it’s relaxing to take exposures that are measured by the seconds as opposed to hundredths of a second…

So - here is a shot with the Pentax 6x7 and Pinhole body cap. This is labeled as an f244 pinhole. I was captivated by the fading dogwoods at the edges of forest clearings, so that is the subject of many of these shots (click on any shot for a larger file): And here is a dogwood shot with the Kinoflex: The Pentax body cap is (I think) a laser cut pinhole. The Kinoflex was drilled, and even to the unaided eye irregularities in the roundness of the pinhole can be seen. From imperical tess with exposures, I reckon the Kinoflex to be around f180.

Finally - a few small trees in a clearing. At this point I got distracted by a snake, and stopped with the pinholes and started shooting macros: More images will be in the Photoblog as I process them.

World pinhole day would have been last Sunday, April 24, but since that was Easter the folks how run the contest extended the time period by several days. (More about world pinhole day at http://www.pinholeday.org/) Of course, that is the South Haven lighthouse on the Lake Michigan Shore.

This was taken with my trusty Pentax 6x7 medium format camera with a pinhole body cap. The film used was some very old (and very expired) Kodak E100V transparency (slide) film.

I’m always trying to learn new things, so here are a few things I learned with this project:

1. The pinhole body cap does not form an entirely light proof seal against the camera body. In this shot you can see a mild light leak in the arching light areas to the left of the lighthouse. In some shots the light leaks totally whiles out the exposure. OK - I’m sure I was careless in how I mounted the body cap in a few cases, but I’m not sure if the body cap mounted on the camera is lightproof. (And then I wonder… why *should* a body cap be light proof, eh?)

I’ll be testing that…

2. The Kodak E100V had expired in 2004, but here we are, 7 years later, and it performed fine. It was stored in a deep freeze so that probably helped. I’ll be less worried about expired film going forward (good news since I have a freezer full of expired film…)

And BTW - I wouldn’t recommend slide film for any pinhole work, unless you can really get your exposure precise. I just really wanted to get rid of this film after looking at it in the freezer for the past 8 years, so I crossed my fingers and bracketed…

With Worldwide Pinhole Day just a few weeks away, I decided to look at some new options for pinhold photography. Up till now I’ve been using a converted Kinoflex twin lens reflect camera, which was converted to a pinhole with a micro-drill. It is very nice and the TLR finder makes composing a breeze. However, the pinhole in this camera is not very small - based on exposure experience I estimate it to be in the f90 to f128 range.

There are loads of pinhole options on ebay these days, from holgas to dslr body caps to beautiful hand made wooden cameras. For me, having some sort of a finder is essential - I get too fussy about composition to just guess what is going to wind up in the frame. Many of the cameras out there have no finder, and that ruled them out for me.

While I was poking around, I found a nice pinhole body cap for the Pentax 6x7/ 67 /67II family of cameras. I gave this a test drive yesterday - here is the first shot I took with the camera, a 32 minute exposure: The documentation says the aperture is f244, which would be about 8 stops from f16. To estimate the exposure I used a light meter to take a reading at f16, which showed a shutter speed of 15 seconds. I then doubled the shutter speed 7 times - 30s, 1m, 2m, 4m, 8m, 16m, 32m, each doubling being one stop. I decided to call it quits at 7 stops - if I went the full 8 stops we’d have an hour long exposure. I wasn’t sure if the battery on the 6x7 would hold the mirror and shutter open that long. The negative was definitely thin, but scannable. Film used was Agfa APX 100 developed in Rodinal, 1:50 for 17 minutes.

There is nothing particularly interesting about the radiator, but I like the tonality. This and the other test images look fairly sharp, for pinholes, which is what I was hoping for. With the pinhole on the camera the finder is way too dark to do any composition, but the standard Takumar 105mm f2.4 lens is pretty close in angle of veiw to the pinhole, just a little narrower, so composing with the lens and swapping it out for the pinhole works fine.

I’m looking forward to running this through it’s paces a little more in the next few weeks! While I bought my pinhole body cap on ebay, it came from the folks at pinholeedum.com.

It’s been over two weeks since I returned from visiting northern Michigan, but it was just a few days ago that I finally developed the two rolls of film that were exposed in a converted Kinoflex TLR. Background here: we were driving up north on World Pinhole Photography Day. I stuck the Kinoflex in the back seat of the car, hoping for a chance to pull off the road to snap a few shots. I first broke out the pinhole camera in Kalkaska, Michigan. We were heading into trout territory, and trout fishing is a major passion in Kalkaska. The city hosts the National Trout Festival on opening day of the trout fishing season (which happened to be the day we were passing through.) A large fountain featuring an enormous brook trout sits smack dab in the middle of the city, and driving through we stopped and shot the better part of a roll of 120 film of the fountain. Nice enough subject matter, but I really wanted to get a landscape shot. After we reached Boyne Mountain and checked into our lodging, we ventured back to the Deadman’s Hill overlook. The late afternoon sun played over the flowering spring trees – just starting to show the first hints of season’s foliage. The sun reflected off the Jordan River, making it a bright ribbon in the valley below.

Personally, this is my favorite pinhole shot from this trip. The sun was shining obliquely into the pinhole camera, and the ‘pinhole flare’ adds a little to the shot as well. Now I just have to resolve to use the pinhole camera more often, and not just on Arbor Day!

So what do World Pinhole Photography Day and Arbor Day have in common?

Nothing, actually. But on Friday (Arbor Day) I read about World Pinhole Photography on the internet in the morning. I didn’t pay a lot of attention, and missed the fact that the announcement clearly said Sunday was the day. So I headed out, pinhole camera in hand, to get some shots of the Allegan Forest. 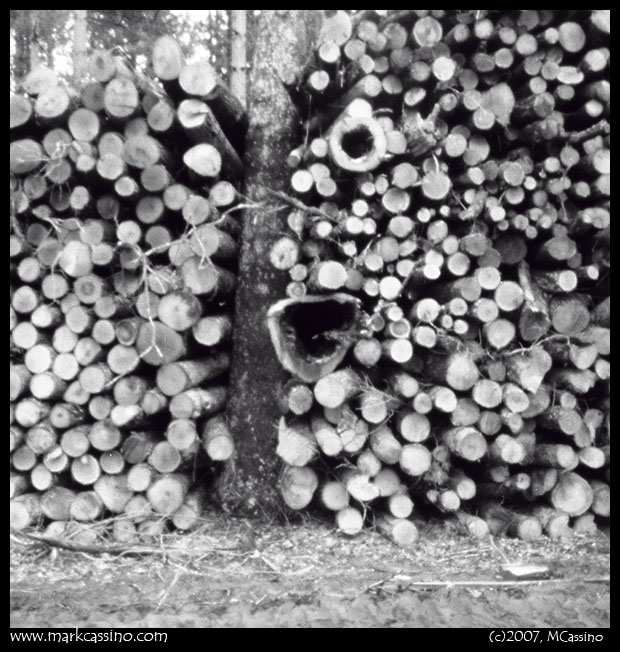 I was surprised to show up at one of my familiar haunts, and find a good chunk of the forest clear cut. I suppose the management is trying to restore more oak savanna, and with 50,000 acres of forest and field the tract of land that was cleared was not hugely significant, but I still found the site of the fallen trees, stacked up in the muck, to be compelling.

And so I made them the subject of the pinhole shots. Not realizing that it was Arbor Day (I discovered that later) there was a certain irony to the site of the stacked tree trunks and clear cut land.

Well, it was good practice for the actual pinhole photography day (a couple of shots to be posted soon). And I’ll have to explore a few more of those 50,000 acres, since these clear cut tracks look pretty crappy for years to follow. 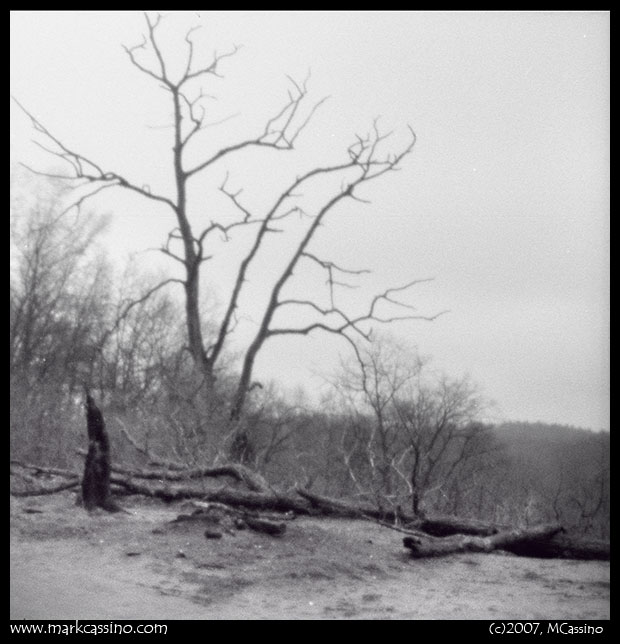 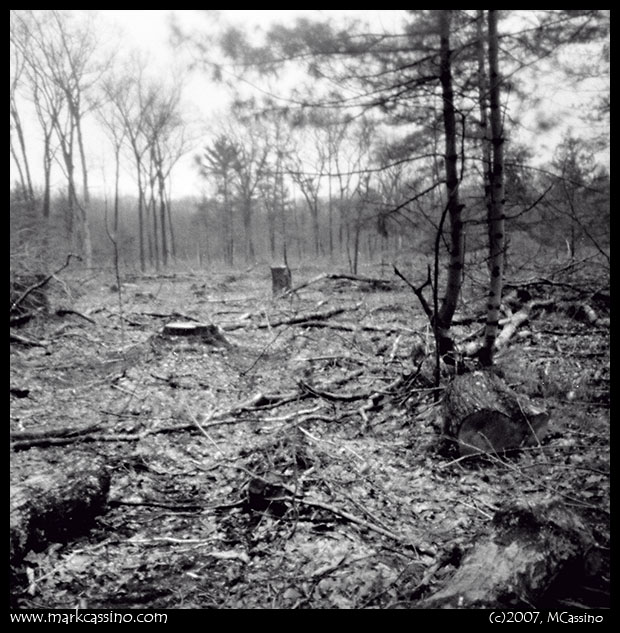 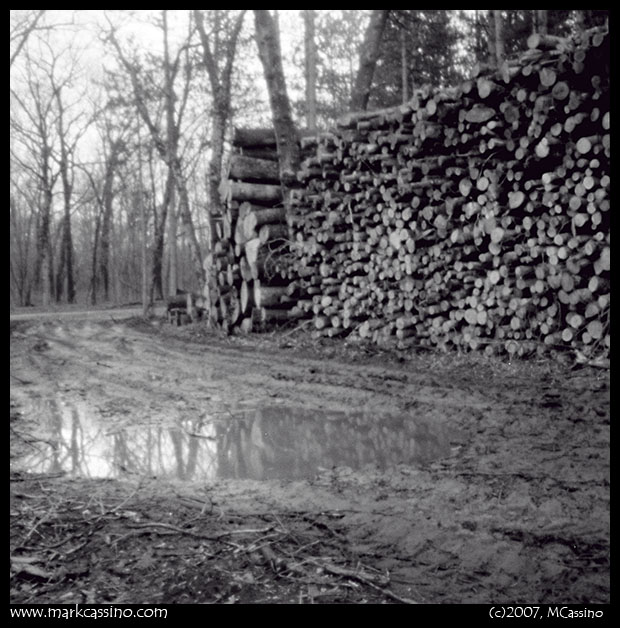 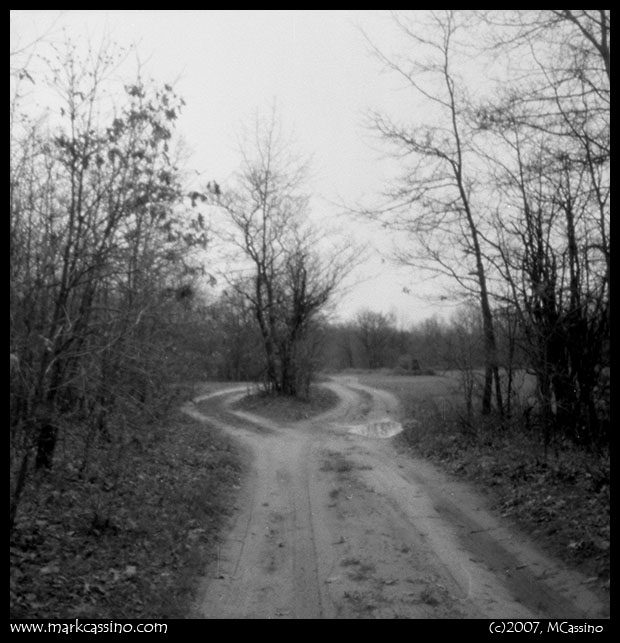