I first became interested in photography in 1997. Prior to that, I had started experimenting with Corel Photopaint (starting with version 2). I used Corel to create digital collages of images I scoured off the internet, or off of royalty free stock CD’s. My interest in photography was first piqued when I coun’t find a simple image of some bricks that I wanted to use in a composition, and so I se

t out to figure out how to take images, convert them to a digital format, and work with them in Corel.

Those were simple times in terms of technology. I started with a 33 mhz 486 with 12 megabytes of ram, but ultimately worked my way up to an AMD 5x86-150, with a whopping 24 megabytes of memory. I found Corel Photopaint – versions 3, 4, 6 (the great leap forward!) and ultimately 7, and 9 to be up to the task for making collages. In fact, I still revert to Photopaint over Photoshop when doing this kind of work.

My initial goal was to create a series of collages that would express the essence of the Emerald Tablet of Hermes Trsimegistus, a cornerstone of alchemical philosophy. As a stepping stone towards this great work, I thought I’d start out with four simple compositions, depicting the basic elements that are the starting point for alchemical thought.

I got through all four, though my rendition of Air sucked. I realized that I needed to take charge of gathering my own source data, and so I bought my first SLR cmaera, and started to learn about photography.

Then came some computer crashes and other disruptions and interference, and before I knew it my collages were lost and I was merrily clicking along with the camera, happily figuring out how to photograph birds, bugs, snowflakes, and other stuff. 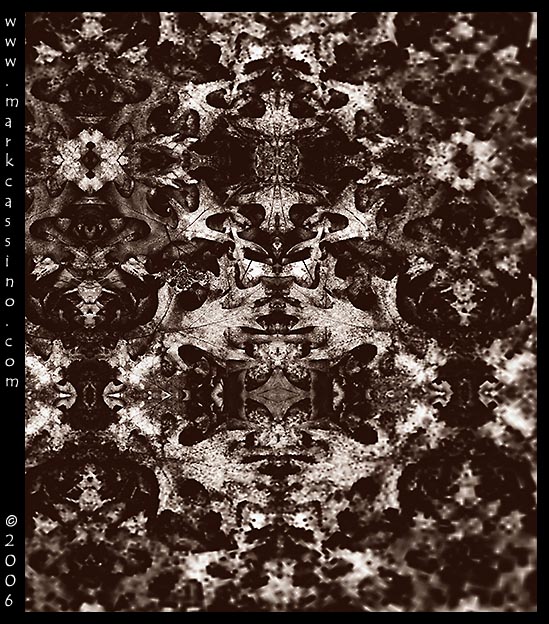 But the original project always remained at the back of my mind.

A few months ago I dusted off my old Iomega Zip drive, and went through the torturous process of copying all of the readable 100 meg disks to a spare PC. (Anyone who has ever worked with a parallel port 100mb Zip Drive knows why the term 'tortuous' comes to mind.) Sifting through the digital debris, I found an archived copy of Water, and a copy of Fire.

Water and Earth were my favorite creations in this early series. Fire is OK, and as I said, Air never really made the grade. All I have of my original Earth image is a single 8 x 10 inkjet print. But I dusted off the surviving two digital images, and started re-working Earth. A decade after starting the project, something new was stirred into the pot, with a new interpretation of earth.

This isn't photography, it’s more or less abstract art. (Fire is weakest because it is too representational.) You may well say its all just crap.

But here it is 2006 – about this time a decade ago I started working on this project. After sojourning in the land of the nature photographer for all this time - a clean, well lighted place, for sure - maybe it’s time to return to something more serious. Maybe it’s time to stop making duplicate images of dragonflies, differentiated only by the day and month in which they were shot, and set myself towards some other purpose. Well, maybe a new task beckons, but my red is muddied, and my white is dingy grey. As I write this a storm is rolling in, the wind has risen and then thunder speaks. The rain cascades down - but here is no water, only rock. 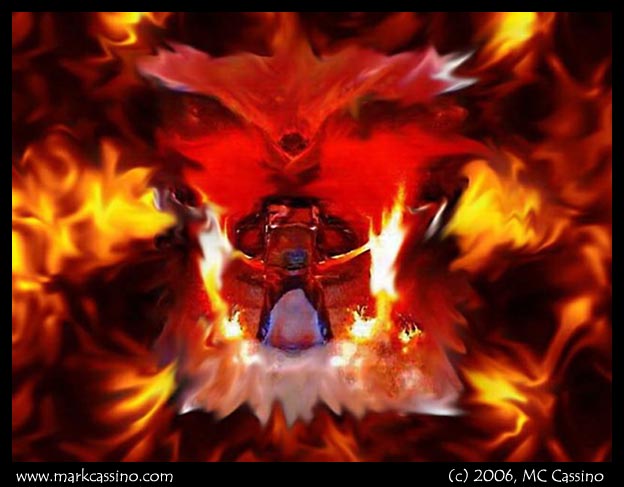 This entry was posted by Mark C and filed under Commentary.

interesting to read these details about the photographer and how and why he became photographer.
air it seems would be quite difficult, but maybe you have it in the photos.
of course, i don’t think you should stop the nature photography. selfish of course, and i realize it’s your time and energy and muse, but i think maybe it’s not seperate projects, just different aspects of the one.
and by the way did i mention that i’ve been enjoying your photos and essays for a long time now?

You are right, Kim - it’s never all or nothing, this or that. Add on, do different things, get unstuck… Thanks for your comment.