A while back I mentioned the my trusty old A* 200mm macro lens had begun to malfunction. I sent it off to Pentax for repair last week, and hope to hear a positive prognosis. Unfortunately, the lens is old enough that repairing it may be impossible, if parts are not available. So that leaves me to find an alternative. Buying another lens is not an option – no similar lens is currently made for Pentax at this time. The Sigma 150mm lens may be coming in the future, but for now is only promised… Well, the obvious alternative would be to use a 100mm macro lens plus a teleconverter, to simulate a true 200mm lens. SO earlier this week I tried just that – the Pentax SMC DFA 100mm f2.8 macro combined with a Kiron MC7 Teleconverter. It’s the only standard 2x converter I have on hand, and in my experience has been pretty good in terms of quality. However – there is never any guarantee that any teleconverter will work well with a particular lens. Sometimes a lens and teleconverter compliment each other, sometimes they don’t… So – affixed to the 2x teleconverter the 100mm macro lens functions as a 200mm f5.6 macro. One nice bonus is that with the teleconverter the lens now focuses to 2x life sized. I had forgotten how much fun it is to get such high magnification – but, when I went out to the garden to experiment it all came back to me. Here’s a shot of a couple of mating Syrphid flies: 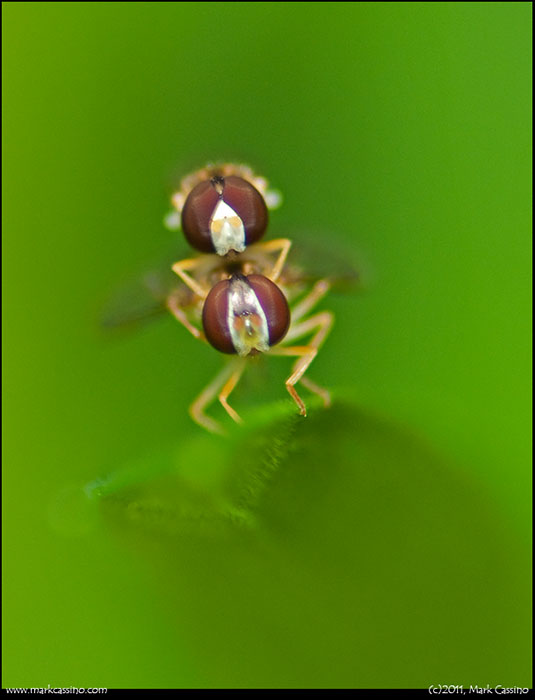 Here’s an actual pixel crop of their cute little faces – note the sexual dimorphism in the shape of their eyes. Also note the lacking acutance (sharp edges) in the image, largely due to the chromatic aberrations (color fringes). While this combo produces some decent resolution in images, the sharpness is lacking. 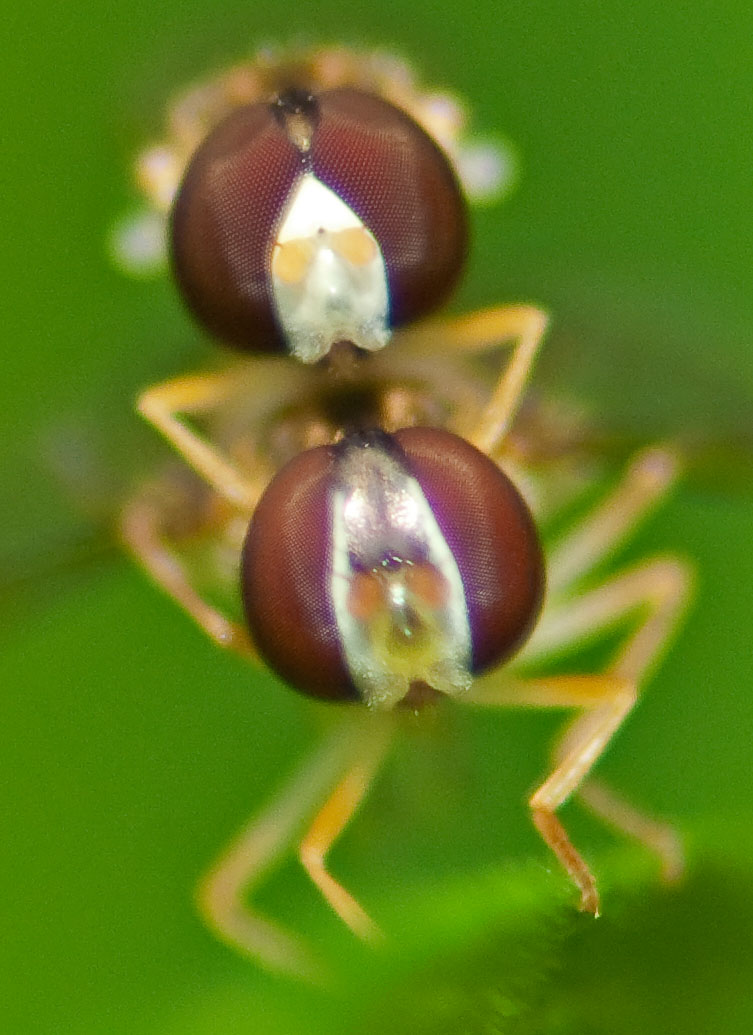 Another shot of the flies, along with another actual pixel shot: 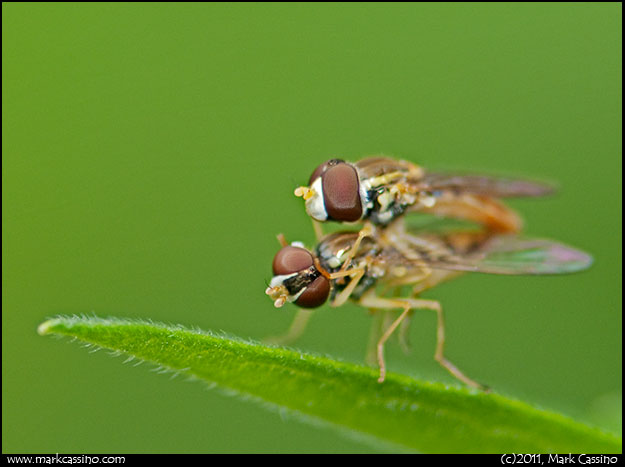 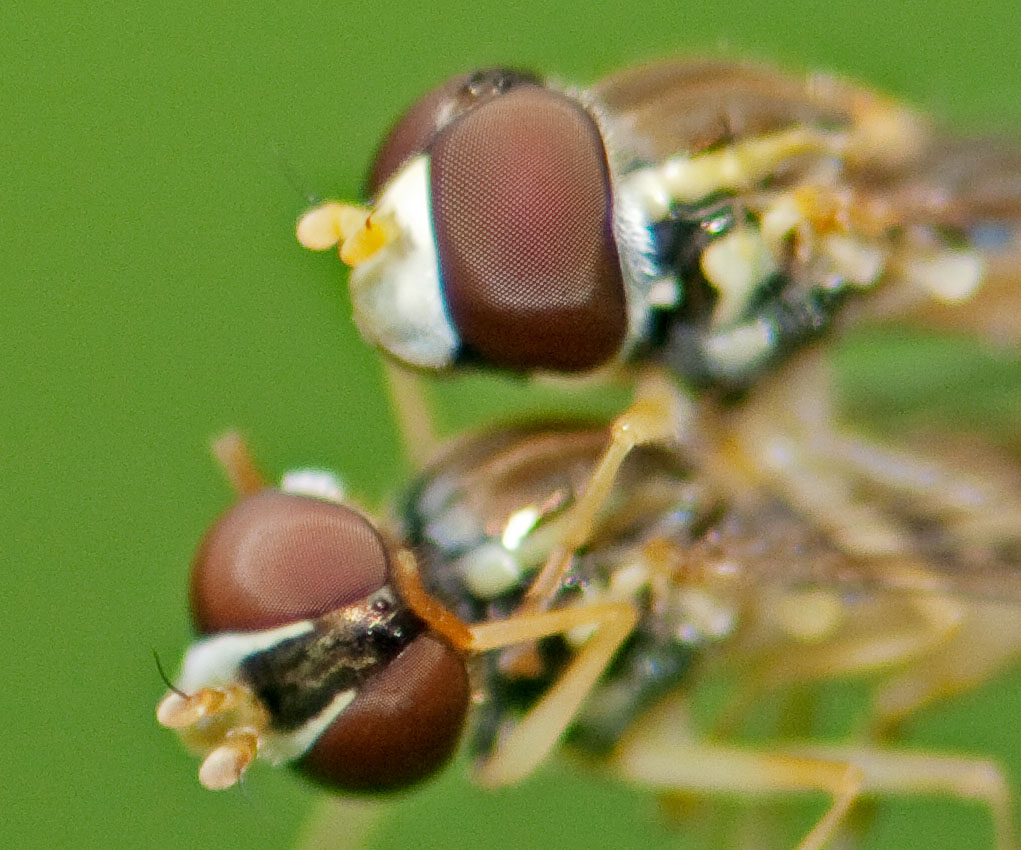 Well… I took those shots on a gloomy afternoon and at a relatively slow shutter speed. They also were pretty high magnification – those little flies are only about 1/4th of an inch in length (~3 mm) and I was shooting well over 1x life-sized. I wondered if larger insects, better light, and lower magnification would produce better results… So I went off to the Allegan Forest, to try again. It was cool and cloudy, but a little sun peaked through the clouds now and then. I found a sluggish four spotted skimmer and set it on a oak spring. It proved to be a very willing subject for a while – at least till it warmed up and flew off. Here’s the best shot I got of the Four Spotted Skimmer, plus an actual pixel shot of its eyes: 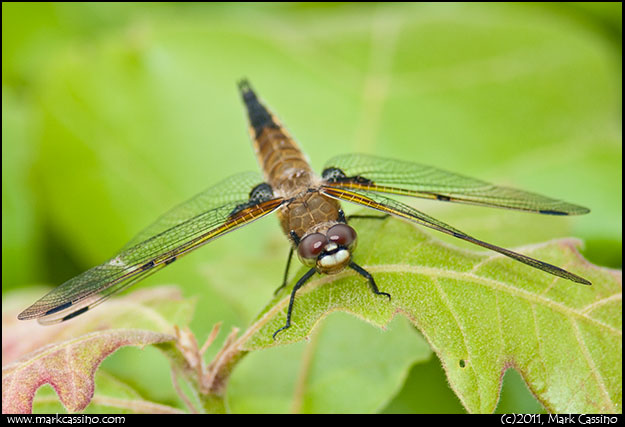 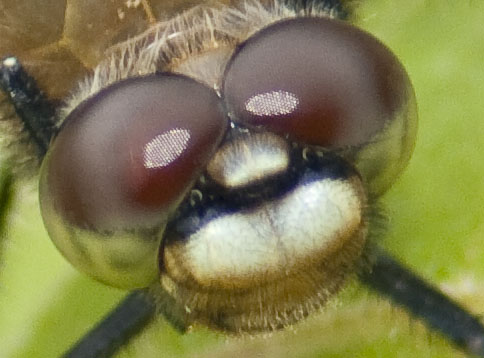 OK – not bad, better lighting obviously helps, but not great. The lack of acutance is confirmed. I moved on to another location an another alternative – the D-FA 100mm lens with the Pentax 1.7x autofocus adapter… The 1.7x autofocus adapter is a curious beast. It is a 1.7x teleconverter, but links to the camera’s autofocus system. The camera can move the elements of the converter around enough to allow for some modest autofocus functionality. For my purposes, I don’t care about autofocus and I just turned it off. I then wandered into a familiar field and down to a small pond, looking for dragonflies. Dot Tailed Whitefaces, Belted Whitefaces, and Frosted Whitefaces were all out in extreme abundance. After a while, I found this Dot Tail sitting on a sandy slope. The insect was pawing at the sand, I’m not sure why, and seemed quite unconcerned about me. So here’s a shot and the actual pixels: 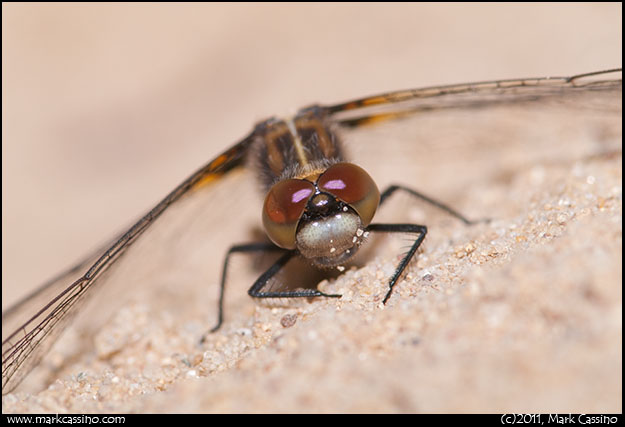 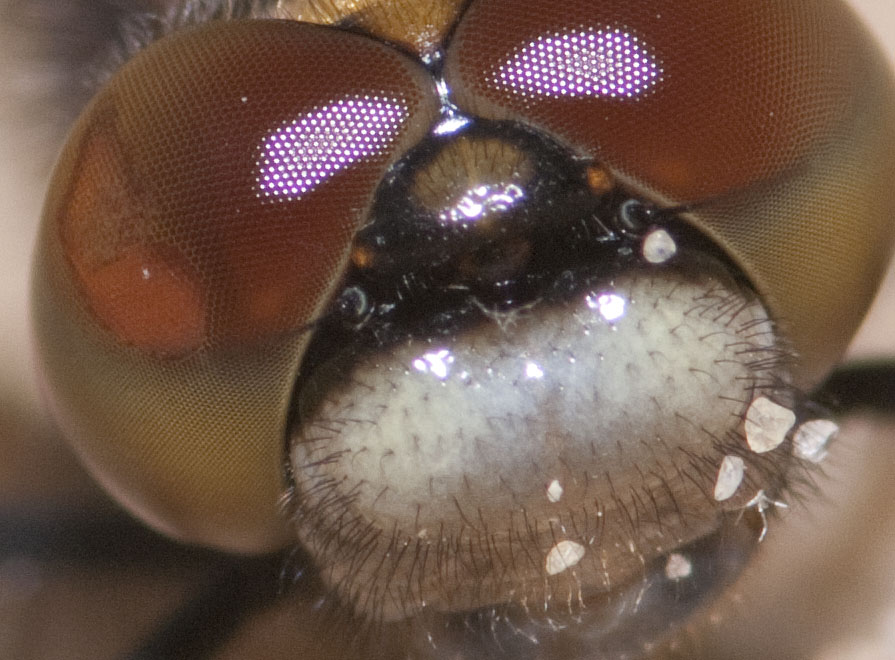 Now… that’s what I’m talking about. The level of detail in the actual pixel shot is quite acceptable, possibly even rivaling the 200mm macro lens. You can see that the dragon’s right eye is damaged, and maybe that explains its distraction. This shot was taken at a little more than 1:1 life-sized, but I am very happy with the acutance, detail, and clarity. Here’s another shot – not an odonate, but a Bee Hunter. Again – greater than 1x life-sized, and pretty good detail and clarity: 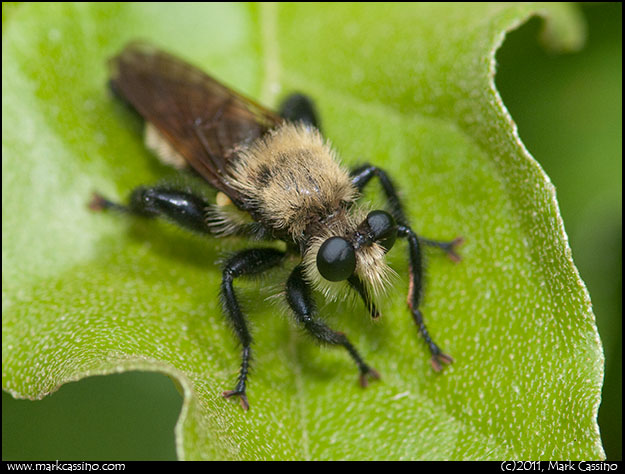 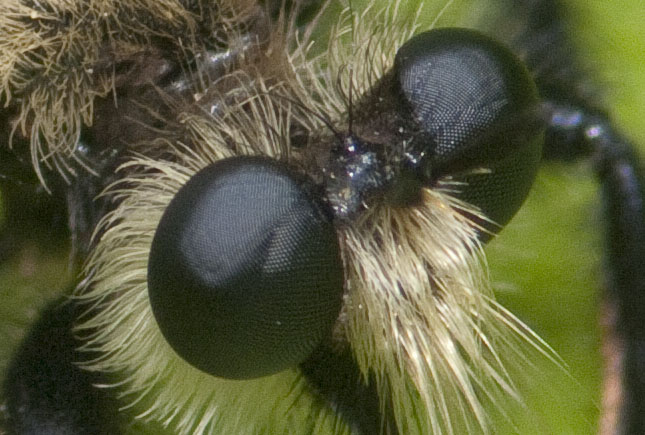 Well, I guess I have my alternative, and while I hope that the 200mm macro lens is repairable and comes back soon, if it doesn’t, that’s OK too…

My A*200 is ‘in the mail” but I can confirm the satisfaction of MF’ing the DA100 + the 1.7. I’ve tried various combos of extension tubes, reversed primes, etc. But this (I hope) the next best thing to the 200A*. If it out performs the combo, I will be truly delighted. jac